The Mr. Vercetti outfit is an outfit in Grand Theft Auto: Vice City that is acquired by Tommy Vercetti by purchasing The Pole Position Club, which is possible after completing Shakedown. The outfit can be found outside the Collar and Cuffs store in Ocean Beach. The outfit consists of a grey pinstriped suit, pink shirt and grey loafers.

The player can use the Mr. Vercetti outfit to eliminate a one or two star wanted level even if Tommy Vercetti is already wearing the outfit. The outfit is possibly a reference to Miami Vice; it is based on an outfit Ricardo Tubbs (Philip Michael Thomas) is seen wearing. The outfit may also be another reference to the 1983 film Scarface; it is very similar to the outfit Tony Montana wears during the last part of the film, including his last stand. 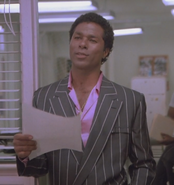 The outfit from Miami Vice that served as the inspiration for the Mr. Vercetti suit.

The outfit's cutscene appearance. Note the cream loafers and the lighter color of the dress shirt as well as the suit itself.
Add a photo to this gallery
Retrieved from "https://gta.fandom.com/wiki/Mr._Vercetti_outfit?oldid=1238976"
Community content is available under CC-BY-SA unless otherwise noted.