"No, he ain't the Mr. Raspberry Jam I knew and loved."
―Floyd

"He brought great joy to a lonely man..."
―Trevor

He is first seen in the mission Scouting the Port. Once the player passes the mission, the player can interact with him in Floyd's Apartment.

During the time Trevor lives in the apartment, he savagely defiled the toy several times, including tearing out an eye and pulling out some of its stuffing, much to the dismay of Floyd.

When "playing" with Mr. Raspberry Jam as Trevor, all Trevor will do is lift it up, say something to it, and put it back down, there are several different animations that go with this.

If Franklin Clinton and Michael De Santa kill Trevor in Something Sensible, Trevor's truck will be destroyed in a petrol explosion, destroying Mr. Raspberry Jam if he's installed onto the truck.

An Artwork of Trevor's Bodhi with Mr. Raspberry Jam on the grille. 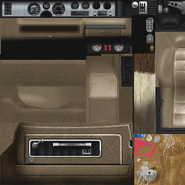 Texture file for the Bodhi's interior, with Mr. Raspberry Jam's on the bottom right. 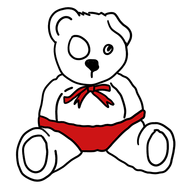 The graphic of the Teddy Bear Tattoo in Grand Theft Auto Online.
Add a photo to this gallery

Retrieved from "https://gta.fandom.com/wiki/Mr._Raspberry_Jam?oldid=1199302"
Community content is available under CC-BY-SA unless otherwise noted.