• ­Take down the bikers.

• ­Go to the riverside trailer.

• ­Push the trailer into the river.

Ability to play as Trevor

"Trevor has something to discuss with the Lost Motorcycle Club."
―GTA V description at Rockstar Games Social Club

Ashley: "Leave it Johnny, leave it."
Johnny: "The crystal has got us, babe, but that don't make it right."
―Ashley Butler, trying to calm Johnny Klebitz down.

"Who the fuck are you speaking to? Who? Who? I'm talking to you! Huh?! You fuck! Huh? Next time don't get in my fucking face! I just saw a fucking ghost and now I've got to hear your crap?! Get up! Get up! Fuck you, then!"
―Trevor Philips, to Johnny Klebitz, right after killing him.

After Franklin meets Michael at his house, they each have a drink to celebrate their successful heist. While they discuss business, the FIB agent who offered Michael protection, Dave Norton, then appears out of the blue and asks what's wrong with Michael, before bringing up the possibility of Trevor discovering that his former partner-in-crime is actually still alive. Michael merely brushes the question claiming that Trevor has to be dead. Dave warns Michael about the potential repercussions of the heist while turning on the TV to show a news reporter interviewing the police officer that Michael had threatened outside the jewelry store. Michael claims that they are not in any danger while denying perpetrating the heist.

Unfortunately for him, Trevor is alive and kicking in his house out in rural Blaine County. The former thief turned drug-addicted sociopath happens to overhear the same news report, while having rough sex with Ashley Butler. The officer being interviewed quotes a line used by one of the robbers: "You forget a thousand things everyday, make sure this is one of them." Trevor instantly recognises this as a phrase often used by Michael, whom Trevor believes to be dead. Shocked, Trevor zips up his pants, grabs a beer, and walks out of the house, encountering Johnny Klebitz, the leader of The Lost Motorcycle Club, who angrily tries to confront a still shocked Trevor about the latter's ongoing affair with Ashley while Wade Hebert and Ron Jakowski try to calm Johnny down.

Still shocked and confused, Trevor attempts to walk away from the confrontation while Johnny continues to express his anger. Already rattled by the knowledge of Michael suddenly being alive, Trevor is pushed to a breaking point; he suddenly fires away insults and offensive jokes about Johnny's addiction to meth, all in a "mostly" calm tone. He even orders Johnny to pull down his pants so that they may have sex, mockingly claiming that it is the reason why there is friction between the two of them.

An emotionally drained Johnny then calms down, sadly admitting to Trevor that he still loves Ashley. Trevor feigns an attempt to try and console Johnny before suddenly throwing him to the ground and smashing a beer bottle over his head. Trevor then repeatedly stomps on Johnny's head, punctuating each stomp with "Cunt!", killing him in the process, while Ashley, Ron and Wade watch in horror. Trevor then yells angrily at Johnny and orders him to get up, but when he realises that Johnny is dead, he walks away from his body, saying "fuck you then". Ashley runs over to Johnny's dead body while the other three get into Trevor's truck and leave.

"Hey, hey cowboy, do you mind that I fucked your old lady! Sorry, what was that? What? No, no? You don't mind? Oh, because you're a dead man, and the only sentient part of you left is this little bit of brain in the gristle on the end of my boot? Well, thank you very much, cowboy."
―Trevor Philips, to Terry Thorpe and Clay Simons, about Johnny's death.

Knowing that Johnny's gang will be very angry over their leader's death, Trevor decides to wipe out the local chapter of The Lost M.C. and their meth business from Blaine County, before they have a chance to exact revenge. He drives with Wade and Ron to a Lost hangout in Grapeseed where Terry Thorpe, Clay Simons, and other members of the Lost are hanging about. After Trevor announces and mocks Johnny's death, the members of The Lost retreat to their trailer park to notify the rest of the gang. Trevor follows them there and brutally kills the whole gang in his psychotic rage, including Terry and Clay.

Afterwards, Trevor commands Wade to begin looking for Michael Townley, the "ghost" in Los Santos, and drives with Ron to a trailer belonging to the Aztecas leader, Ortega. After pushing Ortega's trailer into the adjacent river, Trevor can kill or spare Ortega, solidifying his new position as Blaine County's meth dealing and illegal firearms trading kingpin. Sparing Ortega will make him reappear as another thug in Trevor Philips Industries, killing him will not, and replaying the mission later on will have the game treat it as if the player spared him regardless.

"The guns and crank in this area go through Trevor Philips Enterprises, or they ain't going!"
Add a photo to this gallery 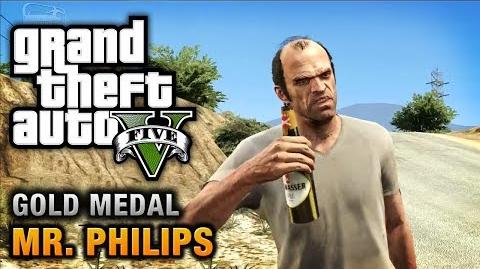 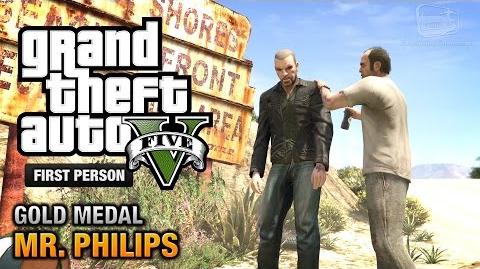 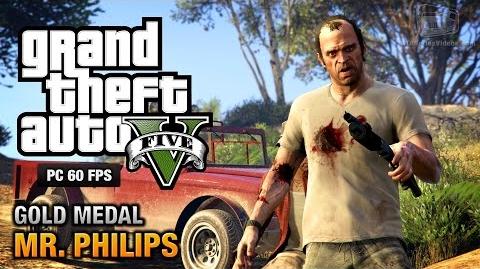 Retrieved from "https://gta.fandom.com/wiki/Mr._Philips?oldid=1075002"
Community content is available under CC-BY-SA unless otherwise noted.