The Ballad of Gay Tony (Mentioned)

Mr. Lopez is an unseen character in The Ballad of Gay Tony.

Mr. Lopez is the father of Ernesto, Leta Lopez-Wilkinson and Luis Lopez and the ex-husband to Adriana Yanira Lopez.

Despite the fact that Mr. Lopez abandoned his wife and three children, Luis still has three pictures of him on the walls in his apartment. Strangely, even though Mr. Lopez left his family when his children were young, one of those pictures show Mr. Lopez in an Marine Corps MARPAT, which didn't start circulating in the Marine Corps until 2001-2004.

Mr. Lopez bears a striking resemblance to Luis, even down to the goatee. In the game, Luis' mother mentions Mr. Lopez and said that Luis is "just like his father," when Luis was treating his mother with hardly any respect in Momma's Boy.

Leta informs Luis to get her children's pictures up and remove their father's pictures, calling their father an "asshole". Luis and Leta have a strong disliking for their father, but Ernesto appears to be indifferent. 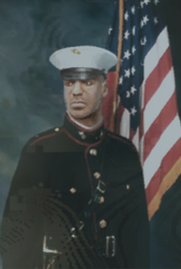 Mr. Lopez as seen in his dress blue uniform.