As mentioned, the Mower is designed as a low-powered sit down mower, but it cannot be used to kill people or cut grass. It is presumably based on a Craftsman model but with small circular headlamps mounted on the sides, next to the main grille. It may also be based on the 1992 John Deere 322.

The Lawn Mower returns with a modernized design, seemingly based on the John Deere LX172 while its front grille and trim is similar to the New Holland LS45, but instead of a single rectangular headlight, the vehicle uses two rectagular headlights (that are placed to look like a single unit). Unlike the GTA San Andreas rendition, the Lawn Mower lacks tail lights, since the vehicle is not intended for use on public roads, but rather for enclosed properties.

The Mower's default colours comes in Green, Red and 2 different shades of blue. These may be based on the colours of John Deere, Massey Ferguson and New Holland respectively.

The vehicle features a more realistic mowing equipment and noticeably rugged tires, in order to provide better traction on lawn, as well as a set of gauges commonly found in vans and trucks. It is one of the smallest vehicles available, on par with the Airtug. 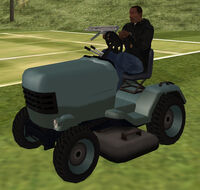 The Mower is generally slow, and while the vehicle is easy to control when traveling normally, the vehicle handles more poorly when picking up speed going downhill. The vehicle is thus the slowest in GTA San Andreas, even slower than the Sweeper. However, as it is motorized, the vehicle can be repaired at a Pay 'n' Spray. Additionally, the player cannot perform a drive-by from the front of the mower, since it is designed with car traits.

Its engine has the same sound as the Kart's.

The Lawn Mower appears to be powered by a V8 engine, but appears to sound like a small diesel engine, similar to the Forklift. It has a single-speed transmission and a front wheel drive layout. Based on the files, speed is limited to just roughly 13 mph, making it the second slowest land vehicle in the game (only above the Dozer's speed of 9 mph). This also makes the vehicle even slower than the player on foot.

Its short wheelbase and small wheels enable it to turn corners sharply, but the Lawn Mower is very slow, possessing bad acceleration and torque. Its low ground clearance prevents it from going over small bumps or even curbs without getting stuck. The open-cabin nature of the Lawn Mower leaves the player susceptible to gunfire, making the Lawn Mower a poor choice for a getaway vehicle.

When riding a Lawn Mower, players are able to use the Sawed-Off Shotgun as a mean of defense.

The Lawn Mower on the updated Rockstar Games Social Club.

The Lawn Mower in the cinematic preview on Rockstar Games Social Club.