“PROPPED UP
Reports of the recent break in at Solomon Richard's[Sic] personal studio say the producer is heartbroken over the theft of some of Vinewood's most iconic props.
The police have, as of yet, been unable to recover the lost property, prompting Richards himself to post a reward for any citizen willing to take up the task.”
— GTA Online Entry screen.

Movie Props are a collectible in Grand Theft Auto Online, added as part of the Los Santos Summer Special update, released on August 11, 2020.

“This is Mr Richards. Yes THE Mr Richards. There's been a robbery at my studio. My lawyers are busy incentivizing the police, but let's face it, the LSPD couldn't find the hole in a donut. Besides, a case like this requires a personal touch. I hear you're the one to call. Come to my studio and take a look.”
— Solomon
A crime has occurred at Richards Majestic. Visit Solomon Richards' office

Recover the stolen Movie Props to earn Cash and RP. Find and return them all to unlock a bonus reward.
“You see? All of my priceless collector's pieces, gone! Quite honestly this city's turned to a shit heap. It used to be fun being rich! Look, find the pieces, return them to the studio, and you'll find I know how to look after my friends. May you consider that an incentive.”
— Solomon

There are ten movie props scattered throughout the state of San Andreas. Once collected, the player must return the movie props to Solomon Richards' office in Backlot City.

For players with controller vibration available, this will provide a bonus clue when a collectible is nearby.[1]

When appropriate, 'Solomon's Office' can be conveniently found under Quick GPS in the Interaction Menu.

There are 7 fixed locations where props to pick up are found. The player can collect these in any order and can collect as many as desired before returning them to Solomon's Office.

As well as 7 fixed props, there are a total of 3 different vehicles containing a prop with 3 different spawn locations for each vehicle, some static and some on the move. Each of the 3 different vehicles will only spawn in one of their locations. Each moving vehicle will have an armed passenger along with the driver. Each parked vehicle is accompanied by 2-4 armed NPCs. Once spawned, the player has a limited amount of time to get to the spawn location, marked with a light blue circle on the map. A countdown timer is provided.

Once the NPCs have been taken care of, the player will have at least a one star wanted level.

Getting in the vehicle will provide a waypoint back to a parking reticule in Backlot City and trigger 'Lose the Cops.' This can be done the usual way, or by getting back to Backlot City without being seen. Once done, 'Deliver the Movie Prop to Solomon's Office.' will trigger, at which driving into the parking reticule in front of the loading door of Stage 1 will finish the mission. There is a time limit for this.

If the player happens to have any fixed props on them when they complete the delivery, those will also be turned in at the same time as well.

If the player returns all the props and then joins a new session, they will get a final message.

“Everything back where it belongs. Well done, kid, you'll go far in this town. Head into my office - I've left you a little token of my appreciation. Something money can't buy. You're welcome in advance.”
— Solomon
Visit Solomon's Office

to collect your reward.

Each prop returned will take its proper place once again in the office. Upon returning the 10th and final prop, the player will unlock the "The Space Interloper" outfit, found inside a cardboard box in Solomon's office, as well as an additional $50,000 reward. Until the cardboard box is opened, players can explore the office (previously seen in cutscenes in story mode and temporarily accessible in the side mission Murder Mystery); access to the office becomes unavailable once the box is opened. 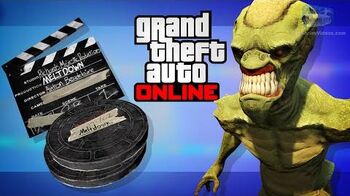