GTA Wiki
Register
Don't have an account?
Sign In
Advertisement
in: Mountains, Geography, Geography in GTA V,
and 9 more
English

“From the top of Mount Josiah, the Alamo Sea is a view that stimulates all the senses from the eyes, to the nose, to the back of the throat.”
— GTA V digital manual

Mount Josiah is one of three mountains in San Andreas in Grand Theft Auto V and Grand Theft Auto Online, the others being Mount Chiliad and Mount Gordo. It is located on the west side of San Andreas, just north of Fort Zancudo and west of the Alamo Sea.

It is the second tallest peak in the state. The mountain is completely surrounded by water; Cassidy Creek in the north, the Alamo Sea in the east, the Zancudo River in the south and the ocean to the west. The northern side of the mountain is very steep.

Fort Zancudo is located at the foot of the mountain on the south side. The mountain can be used to get into the military base by ramping off the side and over the base's fences; however, the player will still get a four-star wanted level.

Approaching Mount Josiah from the east of the map will reveal beds of rock that have been folded by geological tectonic stresses to form antiformal beds, with some smaller synforms located at the base of the sequence. 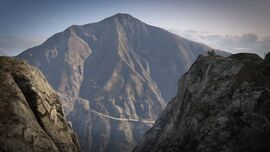 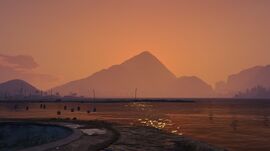 Mount Josiah viewed from the Alamo Sea with the sun setting behind it.