GTA Wiki
Register
Don't have an account?
Sign In
Advertisement
in: Articles with section stubs, Mountains, Locations,
and 10 more
English

A View of Mount Gordo from Mount Chiliad.

“Ever wanted to do yoga on top of a mountain? Nothing puts you in touch with your spiritual side like a headstand at high altitude in gale-force winds.”
— GTA V digital manual

Mount Gordo is one of three named mountain peaks in San Andreas in Grand Theft Auto V and Grand Theft Auto Online, the others being Mount Chiliad and Mount Josiah. Mount Gordo is the smallest of the three. It is located in the northeast of Blaine County. A small lake can be found here. The mountain is the site of the Jolene Cranley-Evans ghost easter egg.

The top of the mountain is one of the two locations where Michael can practice yoga. The other being Michael's mansion.

In 1978, Jolene Cranley-Evans and her husband Jock Cranley were walking by the cliffs overlooking the El Gordo Lighthouse. The couple have been known to be having troubles in their marriage. Jock wanted to leave Blaine County to pursue his dreams of becoming a stuntman. Jolene wanted to stay, saying that she had to look after her parents and run their thriving guest house. As a result, during the hike, Jock pushed Jolene off a cliff, and she later died from internal injuries due to her fall. The police concluded that Jolene fell off the cliff by accident, and Jock was released without charges.

Her ghost appears at the top of Mount Gordo at night, between 23:00 and 00:00. When the player approaches her, she disappears. However, she can still be seen through the scope of a sniper rifle despite the player's proximity to her. When viewed from the camp on the eastern foot of the mountain, she can be heard screaming. This does not seem to happen when viewed from atop of the mountain. On the rock that the ghost floats over, the name "Jock" is written with blood, accusing her husband of murder. 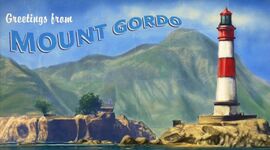 Mount Gordo as seen in the next-gen trailer.