Location on the map (in-game GPS). Galilee is considered part of Mount Chiliad.

Located far to the north, in the Chiliad Mountain State Wilderness, it serves as the tallest mountain in the game at 798m (2619 ft) above sea level. Two small towns sit at its base. Grapeseed can be found to the southeast, and Paleto Bay to the northwest.

At the base and peak is an aerial tramway station to facilitate travel, but the tramway is not available in GTA Online). There is also a hiking trail running down the east side of the mountain.

Inside the cable car station is a cryptic drawing on a wall that depicts what appears to be the mountain and various symbols. There appears to be two sealed doors leading to a cable car station room directly adjacent to the mysterious drawing. The meaning of this drawing relates to petroglyphs that can be found on the side of the mountain in relation to UFOs. Many players have noted that one part of the mural appears to depict a jetpack which is used to escape the launch facility during a GTA Online mission in the region. This same drawing can be seen on one of the murals inside of the Mount Chiliad Launch Facility, a secret facility that contains a lab and is capable of launching missiles, during the GTA Online mission.[1] The inclusion of this drawing on the mural suggests that the US government is somehow involved with the mystery of the UFOs. An egg is also visible which also has a related mission in GTA Online in Smuggler's Run, and can be found underwater in Cayo Perico.

The message "COME BACK WHEN YOUR STORY IS COMPLETE" is written on the back of the observation deck. Under the observation deck, there is a large red eye on the mountain itself, resembling the eye from the cable car station drawing. This is later revealed by the clues on the mountain to be related to the hidden UFO sighting. The same eye can also be seen at the Beam Me Up site in Sandy Shores, along with a drawing of a rain cloud. The mural leads to petroglyphs which can be found on the side of the mountain to unlock the mystery of the mural. These glyphs like the ones at the other sites are likely to inform the player that the weather must be stormy during night in order to see the UFO above the mountain after completing 100% of the story mode.

As revealed in The Doomsday Heist, the mountain is home to a secret US nuclear launch facility built within it in the 1960s that was left locked for decades until Avon Hertz and his AI Clifford took it over to wipe out all of humanity. However, they were ultimately stopped in 2017 by the combined efforts of the IAA, Lester Crest and the GTA Online Protagonist. After the heist, it was likely resealed.

Upon reaching 100% game completion and standing on the observation deck, a UFO with FIB markings will appear overhead. There are three conditions that must be met:

Once the UFO appears, it will stay there as long as the player is on the mountain peak. In addition, other UFOs can be sighted in other locations. It can also appear via save game modding at any time/weather. If approached too close by the player, it will disappear.

A view of Mount Chiliad from above.

A picture of Franklin standing on the bridge leading to Old Man's Crack.

The Mount Chiliad cable car in the PC version. 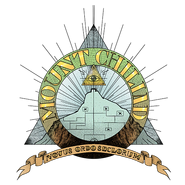 The graphic of the Mount Chiliad Tattoo in Grand Theft Auto Online, featuring the Eye of Providence, the mountain and the motto Novus ordo seclorum, which means "New order of the ages" in Latin.