GTA Wiki
Register
Don't have an account?
Sign In
Advertisement
in: Missions in GTA IV, Law Enforcement, Side Missions, Most Wanted criminals

Target Information Page of Most Wanted

In-game time
Most Wanted are a series of side missions in Grand Theft Auto IV in the same vein as the Vigilante missions from the 3D Universe games.

When stationary in a law enforcement vehicle such as a Police Cruiser, the player can access the Police Computer and see the top ten criminals wanted by the LCPD for the current borough.

There are thirty most wanted criminals in the game - ten in Algonquin, ten spread across Broker, Dukes and Bohan (which are counted as one borough by the police computer), and ten in the State of Alderney.

The player is able to select any of the local ten listed criminals to pursue, they do not have to be done in the listed order, nor does a particular borough's list need to be completed before picking a target in another borough. If the player chooses a target that is too close to their current position, the mission won't start and the police computer will say "The profile is being updated". The target location will show up on the map with a GPS route and the player must drive there in a law enforcement vehicle. If Niko exits the police vehicle en route, a 30 second countdown will show on screen. If the player does not get back into a police vehicle in that time, the mission will be abandoned. There is no time limit for the actual elimination, and the missions can be re-attempted if failed. The Most Wanted list is only unlocked after the mission Crime and Punishment, but if the player types one of the target names into the option "Search Police Records", it can be used to find the target at any time.

Like many other missions in the game, many of the targets stay in a static location and fight Niko Bellic, but in several cases, they try to escape (depending on which mission is being played). Dwayne Forge's backup can be used to help the player.

Many of the targets have associates who also need to be eliminated to successfully complete the mission. Every target and associate counts as a "criminal" towards the criminals killed statistic allowing a total of 133 possible kills to be added. If law enforcement are nearby, Niko's actions can attract a wanted level, however this will be immediately removed as soon as all the targets are eliminated. The Police Scanner can be heard reporting successful takedown of each of the "suspect/s". Police may also get involved in the shootout and actually attack the targets themselves.

Once a mission is completed, the name is marked in red in the most wanted list - if the player tries to undertake the mission again, the police computer reports that the target is deceased, and that mission cannot be started. Even though they are listed in LCPD's Most Wanted and everyone has a mugshot, there are no individual entries in the LCPD Database for them.

Completing all of the most wanted missions is required for 100% completion of the game, and unlocks the achievement Manhunt which is a likely reference to the Rockstar series Manhunt. The player will be noted by a message "All wanted criminals have been eliminated." after it.

Accessing the Most Wanted menu.

If a suspect's location is too close.

If Niko gets out of the cop car before arriving at the location.

A cop getting involved in a shootout.

Almost all of the Most Wanted criminals share their models with generic pedestrians and gang members seen throughout Liberty City and may not consistently appear with the same model configuration as their mugshot. Some are noticeably switched around where their in-game model matches another character's mugshot and vice versa. Even when the facial model is a match, the target may be wearing a different outfit to the one in the mugshot.

Originally there were more Most Wanted criminals as there are names of eight more characters found in the american.gxt and in the script.img. There are also many unused profile mugshots for some criminals. The cut characters include: 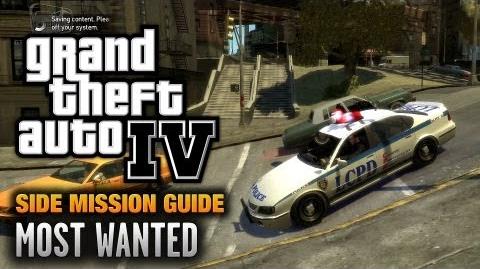