Standard White - 100%
“It may look like a sturdy, affordable minivan with high seating capacity and low build quality. Sure. Its manufacturers were happy with a complete lack of features and utter disregard for good looks. But mindless acceptance of obvious facts did not make this country what it is today. Forget about what the Moonbeam is, and start thinking about what a stunted adolescent with thousands of dollars can pay for it to be. Eligible for customization at Benny's Original Motor Works.”
— Benny's Original Motor Works description.

During development of GTA III, the van was originally known as the "Aster", a clear reference to the Chevrolet Astro name. The van is depicted in the Capital Autos website.

In Grand Theft Auto IV, the Moonbeam (this time with a Declasse manufacturer badge) is still based on a 1985—1994 Chevrolet Astro/1985—1994 GMC Safari, but the front end has been greatly altered, incorporating more realistic detailing and design cues. The tail lights share their textures with the Bobcat and resemble those of the KK Jeep Liberty.

Design-wise, the Moonbeam remains identical, but features various distinctive details around. The front end of the van features a black strip and rectangle turn signals on the bumper, along with a lower extension and a plate holder. The grille and headlight setup remains similar to the 3D Universe renditions, but incorporates a dual set of headlights located in black housings. The hood area is relatively small and features silver lettering displaying the manufacturer's name.

The sides remain relatively similar, but the ride height is a bit lowered and incorporates site steps and silver badging. On the cabin area, the side and rear windows are permanently tinted, a trait also shared with the Minivan.

The rear of the car is more or less identical; the tail lights are smaller in comparison to the 3D Universe iterations and lacks the extra bumper lights, but makes up by featuring silver badging displaying the car's name and the manufacturer. The bumper has a black upper side and a central section for the plate holder.

The Moonbeam can spawn with several accessories:

Most of the lower half of the bodywork is painted in a primary color around the vehicle, while the upper half and the lower trimmings of the vehicle are painted with a secondary color. It uses a set of star-shaped rims.

In Grand Theft Auto Online, the Moonbeam returns with the same design and features. However, the improved graphics makes the car's overall appearance cleaner, with newer light textures and lack of tinted windows (although one can apply window tints through mod shops). Its interior uses the "Cavalcade" interior textures and dials.

Unlike its previous iteration, the Moonbeam no longer has the accessories and instead, they were carried over to its custom variant. The hinged rear passenger doors found on previous iterations have been replaced with sliding doors; therefore, the handles are now located at the front of the doors. Paint scheme remains identical to its GTA IV iteration, with the lower half of the bodywork painted in a primary color around the vehicle and the upper half and lower trimmings of the vehicle painted with a secondary color. The vehicle retains the same wheel design, being similar to the "Five Star" rims available in Los Santos Customs.

Moonbeams between GTA III and GTA Vice City Stories all possess similar handling properties. Performance is poor, due to the under-powered engines, rear wheel drive layouts (Moonbeams in GTA III and Vice City are front-wheel drive), heavy bodies, soft suspension, and high center of gravity (leading to a tendency to flip on rough terrains); as a result, the Moonbeam is generally unsuitable for high-speed driving and has little practical use aside its fundamental function as a mode of transport. In GTA San Andreas it's one of the worst vehicles, as not only does the vehicle have bad performance, it also has a bad build quality and low durability. The Moonbeam only holds a maximum of four occupants.

The GTA IV rendition of the Moonbeam is powered by a modeled V8 engine and features a rear wheel drive layout. However, its lack of power makes this characteristic negligible; the Moonbeam drives as slowly as its predecessors, and still suffers from understeer. Frustratingly, the Moonbeam fails to withstand a large amount of damage, as its large size would suggest.

The vehicle shares the same engine sound as other vans, namely the Pony and the Burrito.

The Moonbeam is powered by an FR single overhead camshaft V8 capable of moving it at an average top speed. Since the vehicle has a minivan-style body, it weighs a bit less than other industrial-style vans, and as a result has decent acceleration. Unfortunately, this costs it in terms of durability and traction. Poor weight distribution and the high, soft suspension causes heavy oversteer while cornering. Even though the Moonbeam is a van, it is classified by the game as a muscle car for races.

Unlike other vehicles similar to its size, such as the Minivan, the Moonbeam's lively engine and transmission work hard at propelling the vehicle off the line quickly, resulting in a long burnout from the rear wheels and yielding an impressive 0-60 time for its size. Although its handling is quick and responsive; unlike other vehicles similar to its size, the Moonbeam is prone to suffer from extreme oversteer during hard cornering, even at relatively low speeds. Traction is acceptable given its RWD drivetrain, and braking is on par with other vehicles it competes against. The Moonbeam is a decent getaway vehicle in terms of its top speed and acceleration thanks to its brisk engine and transmission, but players should be very cautious while cornering hard, especially during a hot pursuit.

The Moonbeam shares a similar sound with sports sedans like the Tailgater and the Schafter.

The "Aster", a beta Moonbeam as depicted prior to GTA III's release.

The Moonbeam on the updated Rockstar Games Social Club.

The Moonbeam Custom in the cinematic preview on Rockstar Games Social Club. 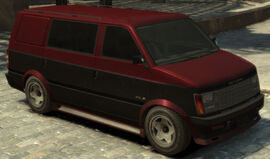 The requested Moonbeam in Stevie's Car Thefts in GTA IV.