For the vehicle with the similar name, see Monster.

Carl Johnson arriving at the ranch in Tierra Robada

• ­Get in the monster truck.

• ­Get to the first check-point.

Wasted
Busted
Monster destroyed or abandoned
Failed to finish under 6:30

"First, what's a GPS? Second, fail what? And third, who the fuck are you?"
— Carl Johnson regarding the instructions.

Monster is a mission in Grand Theft Auto: San Andreas, given to protagonist Carl Johnson by government agent Mike Toreno from his ranch in Tierra Robada, San Andreas.

Carl is welcomed by a mysterious voice, who apparently knows a thing or two about his family. The voice says that Carl needs to impress him and let him see what Carl is made of. He instructs Carl to take a monster truck out for a drive.

Carl talks to this person who instructs him what to specifically do. He also tells Carl about the monster truck, and how to handle it.

After that small talk, Carl traverses Tierra Robada in the monster truck, passing through all thirty-five markers and returning back to the ranch in less than six and a half minutes. Carl is then rewarded with money depending on his time and position.

Unknown Caller: Son, get back to the ranch and I'll explain everything. And I mean everything.

Carl Johnson: Can't you just tell me now? I guess not. 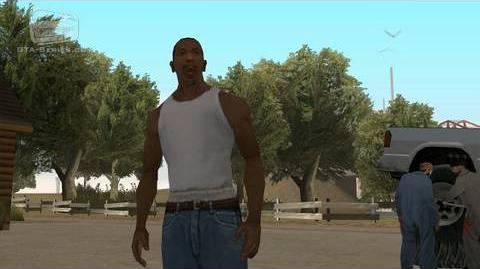 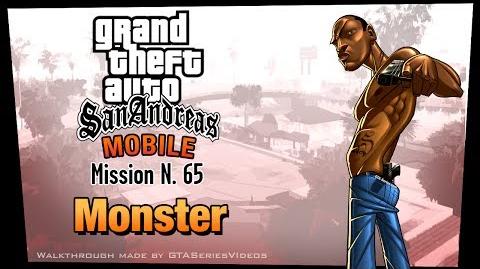 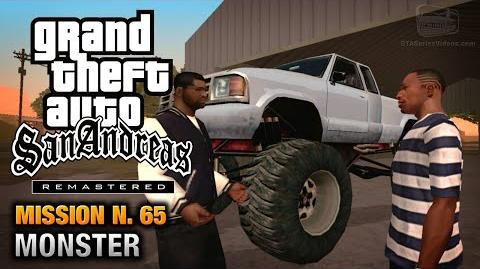 Retrieved from "https://gta.fandom.com/wiki/Monster_(mission)?oldid=1322787"
Community content is available under CC-BY-SA unless otherwise noted.