GTA Wiki
Register
Don't have an account?
Sign In
Advertisement
in: Vehicles, Vehicles in GTA V, Vehicles manufactured by Pegassi,
and 6 more
English

No
“Remember Italy's glory days before feminism and the Euro ruined everything? When a suitcase full of Lire would buy you an espresso and a pack of cigarettes, if you were lucky? Produced by old-money Italians in the 1960s, driven by new-money guidos in the 2010s, the Monroe is a classic supercar that has been making douchebags look stylish for over 50 years.”

The overall design of the Monroe is heavily inspired by the Lamborghini Miura, bearing the distinctive aerodynamic shape and the chromed skirts. The side vents and rear engine vents are also inspired by this. It also shares some elements from the Ford GT40, notably in the headlights and the relatively wide shape. The tail lights are derived from the 1969 Chevrolet Corvette Stingray.

The design of the car is very traditional in comparison to the similarly-designed Bullet, featuring a single intake with a chrome detail around it, rectangle headlamps behind glass casings and small circular fog lamps. The bonnet area features a thin intake on the centre and bears the manufacturer emblem on the front. The whole front section hinges from the front and opens to reveal a storage for a spare wheel.

On the sides, the car features a mostly linear styling, with a curved front and slightly elevaded area. Chrome skirts can be seen at the bottom, together with side intakes on it. The greenhouse area uses a curved windscreen with chrome trimmings around it, classic circular rear-view mirrors, small intakes on the rear-quarter sections and black louvres on the rear window.

The rear end follows a more traditional design, having a small lip on the boot area, circular tail lamps and silver lettering displaying the car's name. The lower half is predominated by a single vent spanning the width of the car and the twin exhaust tubes.

In the enhanced version, the vehicle uses a dedicated interior; this interior is similar to the one used in cars like the Dominator and the Buccaneer, but the carbon-fibre backing is replaced by a wooden variation. The dial set textures are slightly different and are arranged in a way that the main dials are a bit larger, it has two small gauges above the steering column and the central section replaces two of the analog gauges with circular air conditioning outlets. The warning lights are also displayed on black squared sections found beside the smaller driver-side gauges and above the steering column, while the radio set remains in the same place.

The vehicle is only painted in a single colour for the bodywork, and uses a set of wheels that are similar to the "Revolver" muscle rims seen in Los Santos Customs. 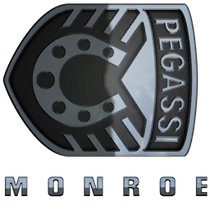 The Monroe is one of the faster classic cars in the game, with its top speed being matched by the JB 700, and beaten by the Z-Type. Acceleration is great for a Sports Classic, and decent for a car in general, reaching 60 mph in the 5 second range. Before the addition of the Pigalle, the Monroe also had superior braking and handling to all sports-classics. Handling is decent, but notably good for a Sports Classic. While most of the other Sports Classics suffer from a case of oversteer, the Monroe has noticeable understeer which makes the car feel faster than it actually is, and as such, is more consistent and less prone to random loss of control.

The Monroe appears to be powered by a transversely-mounted engine, replicating the Lamborghini Miura's V12 engine (although it lacks details to actually define its configuration). Said engine is stated to be a 3.7 liter engine producing 340hp. It is coupled to a 5-speed gearbox in a rear-mid engine, rear wheel drive configuration. It engine sound is generally high-revving and loud.

Monroe's front side with removed bonnet, including a spare wheel and extended chassis. 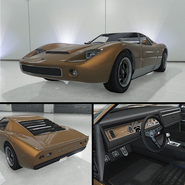 The Monroe on Legendary Motorsport in the enhanced version.

The Monroe on the updated Rockstar Games Social Club.

The Monroe in the cinematic preview on GTA V Rockstar Games Social Club.

The Monroe in the cinematic preview on GTA Online Rockstar Games Social Club.