Michael has his Tailgater returned (with modifications)
Trevor and Michael can freely re-enter Los Santos
Pistol .50 and Heavy Shotgun available in Ammu-Nation (Enhanced version only)

Steve Haines: "My sources are convinced there's a plot in International Affairs, y'know 'The Agency', and they're using this facility to make a serious nerve toxin--"
Trevor: "Haha, bullshit!"
Steve Haines: "Yeah. Which they plan, in their mind blowing insanity, to let a major terrorist release on a metropolitan area, so they can continue to get funding."
—Steve Haines in the intro cutscene.

Michael, Franklin, and Trevor meet at Cape Catfish. Soon, Agents Haines and Dave Norton arrive. Haines wants the protagonists to steal a chemical weapon from the Humane Labs and Research, an IAA research facility. Haines is angry due to a lack of manpower (he claims that he told them that it's a six-man job, when he actually didn't). However, he and Norton agree to join the heist. Haines instructs Trevor and Franklin to handle transport, while Michael joins the agents in infiltrating the lab.

Michael and the agents, dressed in scuba suits, take a Dinghy down the San Andreas coast to a spot near Humane Labs and Research. The three dive and approach an underwater exhaust shaft; to gain entry, the player as Michael must use a torch to cut loose a grate over the shaft's access point. Once inside, the three swim through the shaft until they reach the interior of the lab. From there, the three advance through the halls. Michael is armed with a stun gun and is responsible for taking out the scientists and other employees encountered along the way.

Soon, the three reach their destination. After convincing a scientist to open the lab door, Michael is able to grab the chemical weapon. An alarm is triggered and armed security guards begin to appear. Michael and the two FIB agents push through to the lab's garage area (Michael is now encouraged to use his regular arsenal). Outside is a refrigeration unit meant to transport the chemical weapon; Michael places the weapon in this container.

The player is shifted to Trevor flying the Jetsam Cargobob Steve purchased with the money taken in The Paleto Score. Trevor lowers the Cargobob over the refrigeration unit. However, Haines suddenly insists that the heat is too great and that they call off the operation. Michael argues and Haines soon relents. He runs back into the lab's garage and shoots himself in the leg, presenting himself as a hero to the arriving security agents. However, the United Liberty Paper Contact does not buy it and orders Haines to be detained.

With refrigeration unit in tow, Trevor flies to Sandy Shores Airfield, lowers the container onto a waiting Flatbed, then lands the helicopter. Franklin and Michael confer with Dave, who then leaves with the semitruck. After Dave is gone, Michael checks his phone and sees that Martin Madrazo has accepted Michael's peace offering (the artifact Michael and Trevor stole in the mission Derailed). Michael celebrates with Franklin, excited that he can finally return to Los Santos.

The player is shifted to Trevor as he drives Patricia back to her husband. The radio in Trevor's Bodhi is automatically set to Los Santos Rock Radio, with "If You Leave Me Now" by Chicago setting the appropriate mood. As they drive, Patricia tells the crying Trevor that she will miss him but that this is for the best. Trevor leaves Patricia at Madrazo's ranch, but not before threatening a clearly frightened Martin. Patricia heads inside the house and Trevor drives off. At this point, the mission ends.

"A violent break in at a biotech lab in the San Chianski Mountains ended in bloodshed, mayhem and the loss of a formula for cheap perfume. The meticulously planned raid appears to have been carried out by highly skilled professionals, as thieves swam into the facility using diving equipment to access an underwater drainage pipe. Several research scientists and security personnel were killed at the facility which has been attacked by animal welfare activists in the past. The facility was once believed to have been a testing center for chemical and biological weapons, but those rumors have long been dispelled and now the facility tests soaps, high tech face creams and cosmetics. Agents are baffled as to the scale of the raid, as the perfume formula stolen was not considered particularly valuable."

"Industrial espionage in Blaine County as thieves steal perfume formula. Some highly trained thieves raided a research lab yesterday in order to steal perfume. Several men were killed as raiders carried out an audicious attack that has confused the lab's owners and criminal investigators as the robbers escaped with a new formula for cheap perfume and no one is quite sure why." 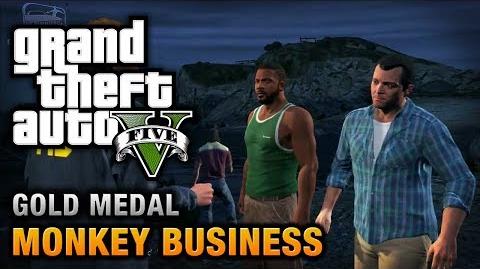 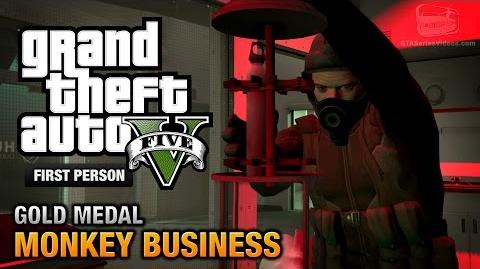 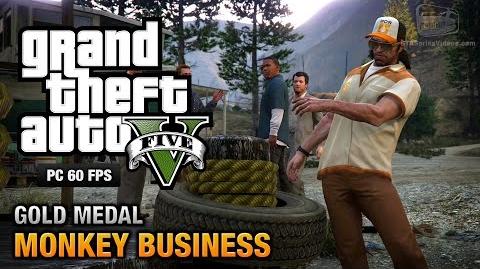 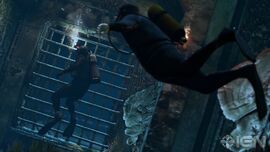 Infiltrating the facility in the enhanced version. 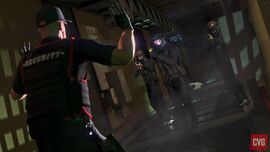 Assaulting the lab in the enhanced version.