Bryan Forbes talking to Victor Vance in his apartment in Downtown, Vice City

•Get to the decoy van.

•Get to the warehouse.

•Get back in the decoy van.

•Drive south and away from Lance.

•The cops are on to you. Don't lose your wanted level.

•Keep your wanted level until Lance reaches his destination.

•Don't lose the cops, or they will chase Lance instead. (Appears if the player takes a police bribe)

•Lance has made it back to the lockup! Lose the cops!

In-game time
“So, Vic, you wanna hear about a little plan that is going to make us three very rich?”

Money for Nothing is the first mission in Grand Theft Auto: Vice City Stories given to protagonist Victor Vance by Bryan Forbes from Forbes' apartment in Downtown Vice City.

Victor visits Forbes' apartment to see him and Lance. After an argument, the trio head to a warehouse to pick up a decoy van to be used during a drug run. After arriving at a warehouse, which is being monitored by the police, they drive the van inside. A few minutes later, Vic drives the decoy van back out to lure the police away from Lances and Forbes. Once Lance and Forbes reach their destination with the van containing the drugs, Vic loses his wanted level and the mission is completed.

The reward for completing this mission is $1,500 and the mission Caught as an Act is unlocked if the mission Havana Good Time is completed.

Lance: I don't trust Forbes, man. Meet me up at the Arena... 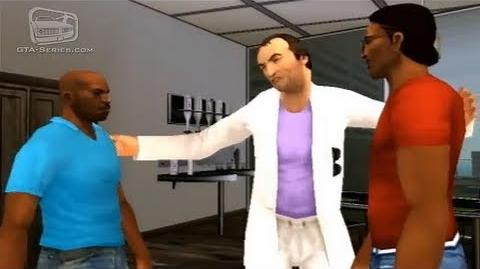