"Oh, I'm really scared of you, motherfucker. Huh? How do you sleep at night, man, loan sharking to old women?"
―Luis Lopez

Momma's Boy is a mission in The Ballad of Gay Tony that protagonist Luis Fernando Lopez does for his mother, Adriana Lopez.

Luis learns that his mother, Adriana has amassed a debt after losing her job and has turned to a shady loan shark named Mr. Santo. Santo is pleasant with Luis' mother, but when alone with Luis, threatens to burn her house and belongings. Mr. Santo creates a plan to fix an underground fighting match with the L.C. Cage Fighters - a group Luis was affiliated with before his prison term - and earn a hefty sum off the betting, enough to pay off the debt. Although wary of the loan shark, Luis reluctantly agrees.

Complete the mission in under 3:10
Take less than 10% damage
Use the crowd to hold an opponent for easier attacking
Use a counter attack to knock out an opponent

Santo will walk Luis to the ring's entrance, which is in an alleyway one block south of his mother's house. Luis gains free entry into the fighting area for this mission. The player will then receive an overview of the fighting area, and the betting booth outside the ring, which can be visited once the mission is completed. As the match begins, the player will receive the standard tutorial for melee combat as he is fighting. The right shoulder button is changed from cover to taunt, and Luis can punch fighters against populated walls to get help from the crowd.

Luis is instructed to defeat the first two fighters: the first fighter is a bulky chef, and the second is a muscular ruffian. Santo will tell Luis to take a dive against the third fighter, who is a scrappy hobo that has fought him in the past. Should Luis proceed to take down the third fighter, Santo will scold him and threaten to burn his mom's house. He then pulls a knife on him, and Luis will be able to kill him. If he takes the dive, Santo will acknowledge his mother's debt as paid and never physically show up again. 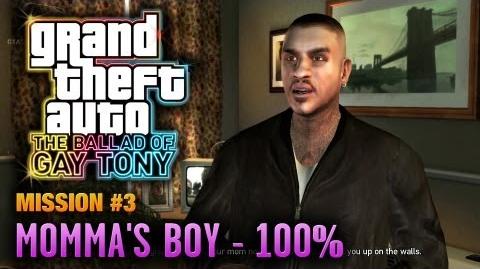 If Luis did take a dive during the third ground (allowing Santo to live), a call later in the game will indicate Santo is still social with Luis' mother, but she no longer owes him any money. Luis will be able to return to the fighting scene to brawl for cash and the Bear Fight achievement for a $100 entry fee, or spectate the fight and bet money on other fighters for a $50 entry fee. Luis' mother's next mission, Corner Kids, will be unlocked.

Retrieved from "https://gta.fandom.com/wiki/Momma%27s_Boy?oldid=1288171"
Community content is available under CC-BY-SA unless otherwise noted.