Momma's is located in Saint Mark's, Portland Island, Liberty City. The restaurant has been in business since 1968 and is run by Toni's mother. Ma lives at the restaurant and her son, Toni, moves in between 1998 and 2001. The restaurant is frequented by Leone Family gang members, including Salvatore Leone. The interior is inaccessible in both games.

The restaurant also features a cramped parking lot, where a Kuruma is parked in GTA III, and a Mafia Sentinel is parked in GTA Liberty City Stories. Both vehicles are often alarmed. The parking lot is missing in GTA Advance, likely due to the limitations of the Game Boy Advance.

An advert for Momma's Restaurante in GTA III, seen on the Liberty Tree promotional website. 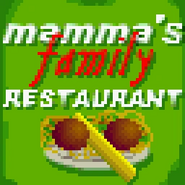