GTA Wiki
Register
Don't have an account?
Sign In
Advertisement
in: Images Needed, Weapons, Weapons in GTA 2,
and 12 more
English

The Molotov Cocktail on the Rockstar Games Social Club website.

A Drop In The Ocean (GTA III)

Wikipedia has an article on:
Molotov Cocktails

The Molotov Cocktail, or Molotov, is a thrown weapon that has appeared in every game since Grand Theft Auto 2. It is the most basic throwable weapon throughout the series.

The Molotov cocktail is an incendiary weapon that is used to set a small area on fire. As in real life, molotovs are home made, they are prepared by inserting a rag into a partially filled glass bottle, allowing the rag to ignite the flammable liquid within. This causes the soaked rag to become flammable itself, allowing it to be lit on fire. Because the fumes from the flammable liquid (which are actually what catches fire, not the liquid itself) are contained within the bottle, full ignition does not occur until the glass container is broken, allowing the fumes to escape. This normally happens upon impact of the Molotov against a hard surface, after being thrown.

Unlike most weapons, the Molotov Cocktail in Grand Theft Auto 2 is one of the most basic weapons, as well as having a generic design of a bottle with the rag set on fire.

The Molotov Cocktail returns in Grand Theft Auto IV with a more detailed design, even featuring a Cherenkov Vodka label on it. It is the only fire-based weapon the player can use.

“An oily rag in a bottle of gasoline makes a cheap, readily available, incendiary device for the masses. ...I predict a riot.”
— Grand Theft Auto: Chinatown Wars description.

The Molotov Cocktail in Grand Theft Auto: Chinatown Wars can be assumed to be the same from GTA IV, except that it features a blank label.

In the DS, iOS & Android versions, the player can use the touch screen to throw Molotov Cocktails at a distance in any direction. Huang Lee can go to gas stations marked in the radar to fill up bottles of gasoline to use as Molotov Cocktails. A minigame is associated to this with the player using the touch screen to aim the gas nozzle to the bottle and shoving a cloth into the bottle. In the PSP version, however, the molotovs can be thrown with the same button used for most weapons, and the molotov making minigame uses a button combination.

Molotov Cocktails do not set fires, but work similar to Grenades, with a few differences. Molotovs explode only upon colliding with something and they cannot be overcooked. They are also incredibly effective against vehicles.

The Molotov Cocktail can set vehicles and groups of pedestrians on fire. Victims on foot will catch fire and die if close enough to the flames. Use of the Molotov will normally result in at a 1-star to 3-star wanted level. It proves to be one of the deadliest weapons for the player when used at close range. It is one of only two weapons which can destroy a Rhino, the other being a Flamethrower

In Grand Theft Auto: Vice City Stories the Molotov is more effective and can destroy a vehicle rapidly fast after one bottle being thrown at the vehicle (providing the vehicle is in the inner circle of the blast) and merely looks like a mini atomic bomb when exploding that deals enough damage to annihilate up to 10 people and 7 vehicles at close range (the latter occurs in a chain reaction). Also, in all 3D Universe games, one or two Molotovs is capable of taking down an airborne NPC helicopter, making it suitable to fend off pursuing Police Mavericks above during a 3-star police chases on foot (except Grand Theft Auto III).

In Grand Theft Auto: San Andreas, when thrown at something like a wall, the Molotov will set alight anyone standing behind it, making it a very effective weapon against enemies behind cover without exposing the player to enemy fire. The Molotov is a very effective and advisable weapon to use in gang warfare since it has the power to take down a large number of enemies or even an entire wave in a single throw. They are not as hard to use as Grenades, as their flames spread in all directions.

In both Grand Theft Auto: Vice City and Grand Theft Auto: San Andreas, the protagonist gains immunity to fire after completing the Firefighter missions. This reward makes Molotovs a lot safer to use and handy at short range.

The Molotov Cocktail appears to be less powerful than other renditions, but is still able to take out targets efficiently. A single bottle can set an enemy on fire and causing them to fall to the ground for a limited time, although a second bottle can be enough to burn them to death (unless the player decides to take them out with another weapon while they are vulnerable). Armored targets like NOOSE/FIB agents may take a third one, as the Body Armor will suppress the fire. Its immediate action will bring the target less time to react and they are likely to be burned with a direct impact from the bottle.

Being hit by one on multiplayer is not a death sentence, because one can pause and will not take fire damage while the flames begin to extinguish. However, one can still be killed, stabbed, shot, or otherwise hurt. They can be used from cars, but it is difficult to do so as the Molotov would have to hit the target directly. A couple Molotovs will flame up a car also, while four will set it ablaze, and six will completely destroy it or render it inoperable.

The Molotov Cocktail is more intended for enemies on foot rather than burning vehicles, although an unarmored one may take a few bottles to destroy it.

Again, the Molotov Cocktail proves to be efficient against unarmored targets on foot, as a single bottle will likely burn them to death, as the fire is somewhat less prone to extinguish. Using it against vehicles may work as well, as the vehicles will be rather sensitive if any of their parts are set on fire. 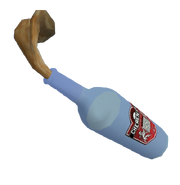 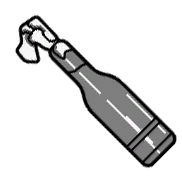 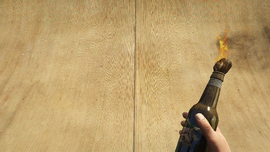 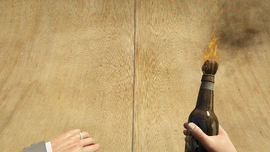 Aiming with a Molotov Cocktail

A Molotov Cocktail at CJ's house.

An entire wave of enemies toasting in flames.

The Ballas died as a result of burning. 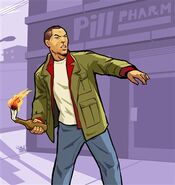 Huang Lee about to throw a Molotov Cocktail.