Mollis is a drug used for people who suffer from erectile dysfunction.

It is most likely a parody of Viagra, or perhaps Cialis (pronounced see-OLL-iss), a rival brand to Viagra: the Mollis logo is almost a mirror image of the graphic on boxes of Cialis.

In GTA IV and GTA V, it is manufactured by Betta Pharmaceuticals. The name possibly comes from "mollies", a street name for MDMA; "Mollis" can also come from "Moles" - a word in Portuguese which means "Flaccid" or "Soft", being a joke relating to erectile dysfunction.

The name and logo bear a striking resemblance to Mulls, another drug manufactured by Betta Pharmaceuticals. 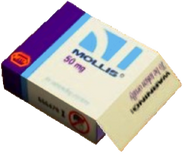 Advertisement for Mollis in GTA IV.

Mollis Advertisement in Arena War.
Add a photo to this gallery

Retrieved from "https://gta.fandom.com/wiki/Mollis?oldid=1165241"
Community content is available under CC-BY-SA unless otherwise noted.