No
“Picture the scene. You're cruising low at 500 feet with a bogey on your six. Your turret man wheels round the guns, the roar of twin propellers in his ears, and cuts a ribbon of .50 cal holes right across their flank. As they fall out of the sky you bring her round, swoop low enough to light a Redwood off the burning wreckage, and make for the sunset. If losing the cops after a spot of petty larceny can be more fun than in a Mogul, we'd sure like to hear about it.
Please note: This aircraft is excluded from Pegasus Lifestyle Management and must be stored in a personal hangar.
”
— Warstock Cache & Carry description.

The Mammoth Mogul is an aircraft featured in Grand Theft Auto Online as part of the GTA Online: Smuggler's Run update, released on October 3rd, 2017, during the Mogul Week event.

The Mogul appears to be based on the Beechcraft Model 18, with the cabin and turret layout of an FMA AeMB.2.

The plane is depicted with a medium-sized fuselage, featuring a rounded nose and a large windshield. Around the main section, the cabin features the corresponding doors and the square side windows, as well as an elevated glass canopy/cupola for the turret gunner. The engines are directly mounted on the large wings and are closer to the fuselage, housing the corresponding exhaust pipes and the main retractable undercarriage, while the wings house taxi lights between the fuselage and the engines, the outer ailerons and the inner air brakes on the rear portions. The tail boom features an additional door on the left and a large empennage, with a wide horizontal stabilizer and elevator, rounded vertical stabilizers and rudders on the edges, and a tail landing undercarriage on the end of the tail boom.

The interior uses the same "Lazer" dial set from aircraft such as the Shamal and the Luxor, and the instrument panel shares the same layout with the aforementioned aircraft. There is a small corridor that leads to the rear turret and the rear door, with additional equipment on the rearmost section.

The primary color of the aircraft is applied on most of the fuselage, the wings, the bombs on the rear-left side, the turret wall and the details of the turret seat, while the secondary color is applied on the front sections of the engine compartments and part of the air data probe/antenna below the nose. The wheels appear to be similar to the industrial wheels seen on various aircraft, but are mostly covered. When destroyed, however, the wheels appear to have no defined rim texture, also being similar to the ones from the Mallard.

The vehicle is armed with a single machine gun on the nose and a single Hawk & Little machine gun turret on the canopy/cupola, based on a Browning M2HB .50 caliber machine gun. It can also be modified with dual guns for both sets, as well as bombs.

Being a medium-sized plane, the Mogul performs roughly similar to aircraft like the Cuban 800 or the Tula, possessing average speed and handling. Its size and mobility makes this plane rather difficult to use when comes to air fights and evasive maneuvers, but is generally stable.

The aircraft is powered by two 8-cylinder radial engines, sharing the same model as the one from the Duster and the Dodo. The engine sound is rather low-revving and noisy compared to the traditional one from aircraft such as the Duster or the Velum, possibly attributed to its aging nature.

The aircraft can be equipped with eight JATO thrusters, which are intended for a near-instant take-off and quick acceleration. JATO thrusters propel the aircraft for 5 seconds and are recharged upon landing.

The Mogul's size and mobility makes it an easy target for attackers, as it can only withstand a few rounds from firearms before starting to smoke and eventually, getting damaged over time until its engines are shut down. Because of its twin-motor nature, the Mogul can still fly for a few minutes with one engine, but its handling and speed are severely affected, often requiring to level the plane to compensate the lack of power from the damaged engine.

While the glass of the turret canopy/cupola cannot be shattered, the gunner is still vulnerable to gunfire, as they are not bulletproof. However, the enclosed design prevents the gunner from falling off the plane when the plane is flying upside down.

When purchased, the Mogul comes painted in the following colors by default: 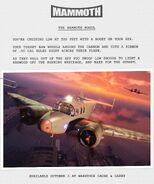 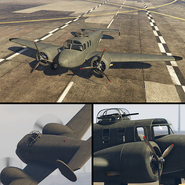 The Mogul on Warstock Cache and Carry.

The Mogul on the updated Rockstar Games Social Club.

The Mogul in a cinematic preview on Rockstar Games Social Club. 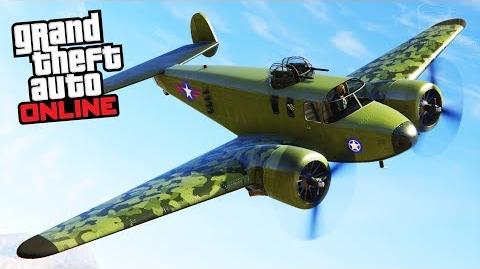