GTA Wiki
Register
Don't have an account?
Sign In
Advertisement
in: Miscellaneous, Communications, Features in GTA 1,
and 9 more
English

In Grand Theft Auto, mobile phones technically function identically to pagers, delivering messages (often one-way) to the player at the bottom of the screen, representing verbal communication instead of the pager's text messages. Much like the pager, messages delivered via a mobile phone are displayed in text form beside the graphical representation of the phone.

The mobile phone is also present in the Grand Theft Auto: London mission packs and functions identically to GTA's mobile phone, but is refashioned into a walkie-talkie as modern mobile phones were not available in the 1960s.

The mobile phone in GTA. Spoken text is displayed to the right of its image.

The mobile phone/walkie-talkie in GTA London, which relays message the same way as in GTA.

Since GTA Vice City, players can choose to answer a ringing mobile phone; failing to answer a call will usually lead to the phone repeatedly ringing between a period of silence until the player answers it, or after the effects of not answering the phone is activated (i.e. a drop in the player's relationship with a girlfriend). During a verbal exchange on the phone, the player's mobility is reduced while the player holds the phone, being incapable of jumping, sprinting, or holding and shooting a weapon until the call ends. Players may also have the option to skip an in-between-mission phonecall.

In GTA Vice City, Tommy Vercetti retrieves a phone from Leo Teal during "Back Alley Brawl", allowing him to receive calls from in-game characters about missions or other topics. The phone's design is based on Motorola DynaTAC, a hugely successful cellphone during the 1980s.

In Grand Theft Auto: San Andreas, Carl Johnson has a phone which he uses to make and receive calls. Again, these may be about missions, relating to the general story, tips from other characters, or may serve no particular purpose — for example, the prank calls CJ receives from Catalina. The HUD icon exists in game files, but it won’t show in normal gameplay. If the player has not visited a girlfriend for a long time, they can sometimes receive calls from any of the six of the girlfriends telling the player to come and date them. The phone's design is that of an early flip-phone, with a small LCD display for numbers. It is based on the Motorola MicroTAC cellphone of the late 1980s/early 1990s, specifically the Digital Personal Communicator model.

In Grand Theft Auto: Liberty City Stories, Toni Cipriani retrieves a phone from a deceased Sindacco member in "Snuff". This phone is presumably the phone he uses from then on, as Toni originally called using a payphone in "Home Sweet Home". The phone's function is similar to those in GTA Vice City and GTA San Andreas, but is depicted as a late-1990s clamshell phone. It is based on the Motorola StarTAC clamshell cellphone.

In Grand Theft Auto: Vice City Stories the phone was replaced by the pager. Some characters can still be seen using mobile phones in cutscenes, which assume the same design as in GTA Vice City.

Jizzy B.'s phone. It appears to resemble an Ericsson EH72. 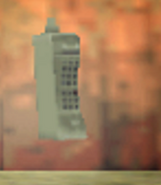 Victor Vance's phone used as a "cutscene item" in Brawn of the Dead in GTA Vice City Stories. 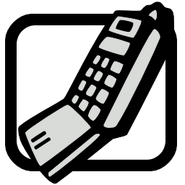 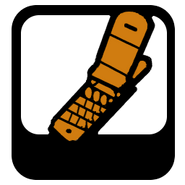 The use of the mobile phone is greatly expanded in Grand Theft Auto IV, The Lost and Damned and The Ballad of Gay Tony, featuring a multitude of features, including the ability to:

In GTA IV, the player starts out with a Badger phone (given to Niko Bellic by his cousin Roman during the second mission) which features a monochrome display as well as limited functionalities (listed above). During "Photo Shoot", the player is given an upgraded replacement, a Whiz wireless phone equipped with:

Themes and advanced ringtones of the phone can be purchased via a website on the in-game internet. Access to vipluxuryringtones.com is initially unavailable in GTA IV until the second model of the phone is acquired.

In The Lost and Damned and The Ballad of Gay Tony, the player's phones are practically identical to Niko's second phone but with cosmetic changes. Johnny and Luis each have a unique theme for their phones; as Johnny's phone assumes a more hardy appearance with a black leather case and has a unique "Lost MC" theme featuring The Lost Motorcycle Club's emblem, while Luis Fernando Lopez' phone appears to be more luxurious and modernised than Niko and Johnny's phones and is round, similar to Johnny's, has a glowing blue keypad and a unique "Club" theme.

As an exclusive feature in The Ballad of Gay Tony, the player can replay any accomplished mission via their phone in order to be able to get a better score on them. 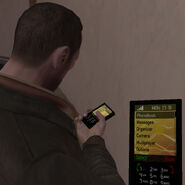 The mobile phone in GTA IV renders its screen and keypad into a display on the lower right of the screen; this is replicated on the "actual" phone Niko holds, as seen here.

Johnny Klebitz' phone in The Lost and Damned.

Luis Fernando Lopez' phone in The Ballad of Gay Tony.

If the player has damaged a vehicle to the point where the engine won't start, the phone can be used to "jumpstart" it by calling any number or contact — the engine will spontaneously function again, although no damage will be repaired. For convenience's sake, one can cancel the phone call as soon as "Calling..." is seen on the phone's display — the engine comes back to life as soon as the call is initiated.

In the console versions of the game, the phone can also be used as a kind of "super handbrake", to instantly stop any vehicle, no matter the speed. Initiating the camera while driving will instantly stop the car — the player can leave the phone open to the "Camera" menu option, and then press

(on Xbox 360) when they want to stop. This is presumably a bug, and was fixed in the PC version — activating the phone camera while driving on PC will merely change the game camera to the "hood cam" perspective, and activate the phone camera as normal. As this exploit requires a camera function, it can only be performed once the player has acquired the second model of phone.

If the player pulls out the phone while passing through a tollbooth, the toll can be payed without stopping the car completely, as long the player slows down the speed of the vehicle.

In the PC version, the Video Editor is an option in the phone.

In both versions, the game will exit out of gameplay, but unsaved progress won't be lost, and once the player leaves SIXAXIS or the Video Editor, the player will then be teleported to the nearest safehouse.

In the GTA V Game Informer cover story, Rockstar Games has said that GTA V will "preserve the mobile phone concept", but Rockstar has made changes to it, such as the player not receiving phone calls from friends all the time (as seen in GTA IV). Rockstar made these changes because of the criticism fans made about there not being enough to do when you're not doing a story mission and since a lot of it was hidden on the phone, they've taken that and moved it onto the map. Rockstar also said that even though it may lose some "functionality", it will gain new features as well. Rockstar described it as being a contemporary phone, with Dan Houser saying that the player will use it for things like "accessing the internet", (much like a smartphone). All pictures taken in-game can be shared to the Rockstar Games Social Club via Snapmatic.

During the main storyline, Michael owns an iFruit 9iX smartphone. However, he can be seen 9 years earlier with a a different mobile phone, during the mission Prologue. Even though this is not a touch-screen phone, Michael will operate it as such if the player uses first-person perspective. On the other hand, Trevor carries a Facade smartphone, and Franklin a Badger smartphone.

The protagonists' smartphones reference three of world's most popular smartphone platforms: Android (Franklin's, similar to a Samsung Galaxy S III), Windows Phone (Trevor's, possibly similar to Nokia Lumia 820), and iOS (Michael's, which obviously resembles the iPhone 4/4S). Their phones are also suited to their real-life counterpart typical users: Samsung phones are favored by youngsters, while iPhone is favored by wealthy people and Nokia has a reputation of surviving harsh conditions much like Trevor's lifestyle, and is known to be one the most durable phones out there (in the enhanced version, Trevor's phone has a crack on the screen, further referencing his reckless and violent way of life). The software of the three platforms, however, is mostly based on iOS, and aside from aesthetics in-game all three phones function in the exact same way.

Unlike in previous games, contacts are not removed from phones - this means that the numbers for deceased characters remain in the player's contact lists long after their deaths.

Michael's phone in the Prologue.

Michael's phone throughout the game after the Prologue.

In GTA Online, players can use their mobile phones to bank their cash into Maze Bank's website. They can also use the phone to contact several other features present in the multiplayer. Unlike in Story Mode, the Online Protagonist will only pull out his/her mobile phone to use the Snapmatic (cell camera) app, and due to perspective, only other players will see this. The player themself will only see the shadow of their character holding the phone if it's sunny enough, their arm extending to the phone in selfie mode, and putting it away after exiting Snapmatic. This was done so that they can still use weapons in self defence while on the mobile phone.

It is identical as Michael's iFruit phone, only with different apps and the colour of the + button.

In the top left corner, there are 3 bars that represents a cellphone's signal strength.