Standard White - 100%
“For heavy duty tactical operations on the move, arms dealers can invest in a Mobile Operations Center (MOC), the kind of powerful support usually enjoyed only by trained assassins or rogue nuclear states. Storable in your Bunker, this drivable command center’s modular construction allows for tailored combinations of vehicle workshop, weapons workshop, luxury living quarters, and command center – with facilities for upgrading and customizing your arsenal and modifying Weaponized Vehicles (including turrets for your MOC that can be manned by your squad) – all at your fingertips, and pulled by a fully customizable commercial semi.”

The Pegasus[1] Mobile Operations Center is a modular semi-trailer featured in the Gunrunning update for Grand Theft Auto Online.

“You are the warzone.”

The Mobile Operations Center is depicted as a twin-axle, large-sized trailer with two stands towards the front, side extended walls with marker lights on the upper side, and side storage boxes. The rear guard rail, side ladders and tail lights are derived from the regular Mule, while the ramp door is actually derived from the ramp variant of the aforementioned vehicle. Unlike the Mule, however, the license plate is located on the center.

The trailer can be painted with two colors, where the primary one is applied on the entire body and the secondary one on the trim/outlines of the actual box (the part that excludes the side extensions). It uses industrial wheels derived from most industrial trucks, such as the Benson and Phantom.

The trailer can be equipped with three cannon turrets, a large frontal one on the front wall of the trailer and two smaller turrets on the upper rear quarters of the body.

The MOC's cargo hold interior is large and is fitted with living quarters, a touch screen and other assets the player can purchase, assigned to three different bays. There is a secure door at the front and the rear ramp door for exit. A blue corona appears in front of the ramp door when stationary.

Taking control of such a large vehicle can be a challenge, as the third person perspective is rather obstructed by the sheer size of the MOC, and is difficult to measure the allocated width of the trailer in first person, especially in stretched areas. The extra width of the modules requires some care in avoiding immovable roadside obstacles, however the combined unit is able to withstand these impacts without detaching the trailer. The trailer height can cause some difficulty navigating low bridges, particularly freeway overbridges, although it can also clip through some obstacles such as the pedestrian walkway between the Union Depository and Arcadius Business Center.

Being a trailer, it cannot be driven, however it does feature its own handling line. The cab unit can be detached from the trailer and driven normally and re-attached at any time. Other semi-truck cabs can then be used to hook onto the MOC and tow it around, however they will not have the additional durability of the custom cabs.

Although difficult to perform, it is possible to crush motorcycles and small vehicles with the MOC by passing it over them, due to its mass being as high as the Rhino Tank.

Although the size of the MOC will be an easy target for attackers, the trailer is very resistant to damage. The MOC is tied with the Avenger for the heaviest armoured vehicle in the game, being able to take 24 RPG rockets or almost 70 rockets from a Buzzard Attack Chopper. As the cab is counted as a separate vehicle, destroying it would render the MOC static and vulnerable. If the MOC is destroyed, it will return to the bunker and can be respawned immediately, but that also means the armored cab must return to the bunker, even if it was not destroyed.

The optional cannons give the trailer some sort of offensive capabilities, firing powerful rounds capable of destroying unarmored cars in a single shot, as well as low-flying aircraft. Fire rate is generally low, taking one second to fire the next round. The positioning of the turrets mean that the whole formation has minimal blind spots, being an efficient desensive transport.

The MOC is added to the player's Interaction Menu and is able to be called to near* wherever the player is located and dispatched back to bunker storage on demand. The player cannot immediately relocate an existing MOC using the menu, they must return it to the bunker and then re-call it to their current location.

Inside the Command Center module is a touch-screen wall mounted display which gives the player access to eight Mobile Operations missions to unlock discounted prices on Warstock Cache & Carry vehicles.

The Living Quarters serve only as recreation areas, with sofas, beds and chairs any player can sit on. A wardrobe is also available to change clothes, in the same way as most regular property wardrobes. It is available by default in Bay 1, although one can choose additional Living Quarters in Bays 2 and 3.

option for Bay 2 allows the player to upgrade selected weapons into Mk II variants and customize them with unique options. It also includes a Gun Locker that works similarly to the one found in Offices.

The Weapon & Vehicle Workshop option occupies Bays 2 and 3, and allows the player to access the same services as the Weapon Workshop option for Bay 2, and the ability to customize Weaponized Vehicles, as these cannot access to Los Santos Customs or Beeker's Garage. It should be noted that while the vehicle can be left stored there, it does not work as a save point and will reset back to its original garage when switching sessions or leaving the game.

The MOC's minimum base cost is $1,225,000 and for every non-default aspect, its price is increased.

The player can modify the vehicle options at any time by re-visiting Warstock Cache & Carry and re-specifying the customization options, but will not receive any credit for previously paid for options. Other modifications can be performed by the Bunker Mechanic inside the Bunker at the Bunker Vehicle Workshop.

“Well, I see you understand the time's coming when you're gonna need a hulluva lot more than a bug-out bag.
This beauty's got you covered, and if you ever change your plans, swing by, and I'll fix her up to be end-of-days ready any which way you please.
”

Once the player acquires the MOC, they can also modify it in their Bunker Vehicle Workshop with several customization options, along with the cab itself.

* Denotes items that can only be unlocked for purchase via research in the bunker property.

An escorted MOC being towed by a Phantom Custom in Grand Theft Auto Online.

The MOC trailer with a Hauler Custom semi.

A Dune FAV inside the MOC. 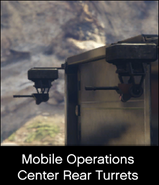 Warning message that appears when selecting the Weapon & Vehicle Workshop.

Gunlocker in the Weapons Workshop.

Close-up of the Front Turret.

Close-up of the Rear Turrets.