Mixed Up With Coke

Mixed Up With Coke

In-game time
“This is what happens when you send bad men to fight bad wars and then take away their jobs. An ex-military unit's been bringing charlie from the South, cutting us out. I wish I could let it slide but it's impossible. They are based at a downtown construction site and have shipments ready to go cross-state in cement trucks. Can you destroy the trucks and the bricks inside?”
— Description

Mixed Up With Coke is a mission in Grand Theft Auto Online given to the player by Martin Madrazo. It is available from 1 to 6 players.

The team needs to head to the marked construction site. The site will be guarded by Professionals. The team must destroy two Mixers in the site. After doing this, Martin will message the player and tell them that some of the trucks have already left the site. At this point, the team must give chase, fending off attacks from more professionals in Grangers along the way. Two more Mixers must be destroyed to complete the mission - The first will eventually stop at Hookies on the Great Ocean Highway, while the second will stop at the construction site in Mirror Park, guarded by a Buzzard Attack Chopper. Once the two trucks are destroyed, the mission is complete. 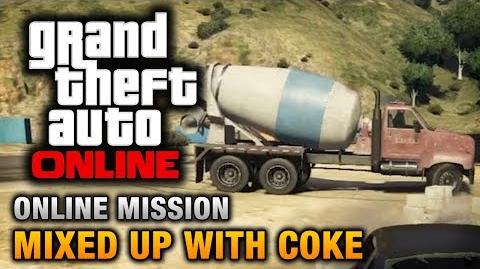