Kim Gurney (GTA III)
“You working regular for Luigi now, huh? It's about time he got a driver we can trust!”
— Misty to Claude in the mission Drive Misty For Me.

Misty is a prostitute working for Luigi Goterelli at his nightclub, Luigi's Sex Club 7, in the Red Light District of Portland, Liberty City.

Mike drives Misty and two other female prostitutes to "high-rolling" clients, on orders from 8-Ball, in an attempt to find out information about the death of Vinnie. She later moves to Staunton Island and begins working for Yakuza co-leader Asuka Kasen, meeting Mike again when is sent by Asuka to deal with a pimp who had been stalking some of her girls.

By 2001, Misty has returned to living on Portland, and begun to work for Luigi Goterelli at his club, Luigi's Sex Club 7 in the Red Light District. She has also become the "regular girl" of prominent Leone Family member and mechanic Joey Leone, an associate of Goterelli's. She first meets Claude when he is sent to pick her up from Sweeney General Hospital and return her to the club. Claude and Misty meet once more when he drives her to Joey Leone's garage in Trenton. The two meet on one final occasion, when Claude is employed by Joey Leone to kill Mike Forelli, a prominent member of the Forelli Family.

Artwork of both Misty and 8-Ball in Grand Theft Auto III. 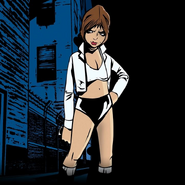 Mike picking up Misty at the Sweeney General Hospital.

Mike after saving Misty from a pimp in Staunton Island.

Misty walking to Claude's car during Drive Misty For Me.

Claude about to drop Misty off at Joey's.

Misty and Claude as Online parents.

Misty as seen in the trailer for Grand Theft Auto III: The Definitve Edition.