From top to bottom, left to right: aerial view of the neighborhood, the Mission Row Police Station, and the Templar Hotel.

It borders Textile City to the north, Strawberry to the south, Legion Square and Pillbox Hill to the west, and La Mesa to the east. It is based on the real-life neighborhood of Skid Row, in Los Angeles.

Mission Row is relatively small and only has a few number of streets. Just like Textile City to the north, Mission Row holds a number of businesses and stores, especially jewellery shops despite the fact that it contains a considerable population of homeless people like its real-life counterpart, Skid Row, which has one of the largest populations of homeless people in the United States. The name "Mission Row" is most likely a reference to the missions that provide food and basic assistance to the poor in Skid Row.

Its streets and sidewalks are lined with boxes, tents, and shopping carts, which contrast with the nearby high-end hotels and office buildings of Pillbox Hill. The few high-end hotels located in this neighborhood show a large difference between the denizens of Mission Row and its buildings. Occasionally, there will be a mugger trying to rob a pedestrian. Police officers can often be seen patrolling the streets in pairs or talking to pedestrians. 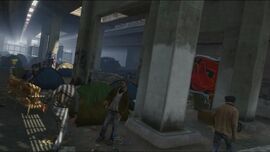 Some homeless people under an overpass.