In Grand Theft Auto Online, Misfire Games appears as a sponsor on the Black Racing Suit. The Misfire Games logo also appears in the textures for Lester Crest's Facade laptop sticker decals in the Gunrunning update, but the laptop does not seem to bear the Misfire logo in-game, however.

The Misfire sticker from Lester's laptop. 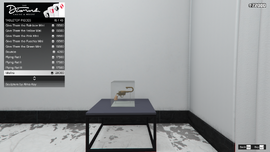