Tenpenny punches CJ in his stomach

•Kill the target and grab the evidence dossier.

•They have spotted you! The target will try to escape, don't let him get away. (If the player gets spotted by the guards or by the target)

•The target is escaping in a helicopter.

•The target has abandoned the helicopter.

•The target is dead and has dropped the evidence dossier, grab it before anyone else does.

•Congratulations, you have the evidence dossier.

In-game time
“Now, there's a ruined town out west of here. Aldea Malvada. And there's some piece of shit DEA officer meeting with an FBI agent with a dossier. Now, CJ, you get the dossier and you make both of them disappear!”

Misappropriation is a mission given to protagonist Carl Johnson by Officer Frank Tenpenny in Grand Theft Auto: San Andreas.

Carl visits C.R.A.S.H. at their house in Prickle Pine, Las Venturas and finds the duo getting a grill ready. Things start out normal, but a paranoid Tenpenny reveals that their careers are in jeopardy and Tenpenny needs Carl to get a dossier containing dirt on the duo and kill the DEA and FBI agents.

Carl heads to Aldea Malvada and intercepts the meeting, killing the enemies and claiming the dossier.

The FBI outpost at Aldea Malvada.

Like all missions for Tenpenny, there is no reward.

Frank Tenpenny: Carl! You got that dossier?

Carl Johnson: Yeah, I got the files. What you want me to do with 'em?

Frank Tenpenny: We need to meet up someplace quiet and take care of things. There's a ghost town, Las Brujas in the devil's Castle, you know it?

Frank Tenpenny: I know you will. I'll see you there. Carl. 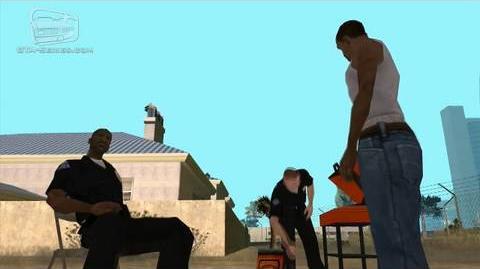 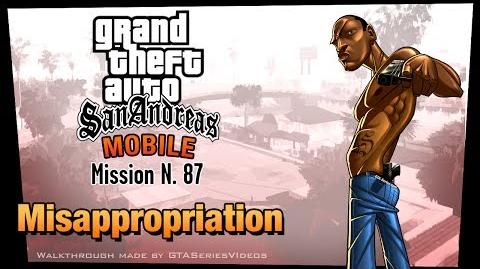 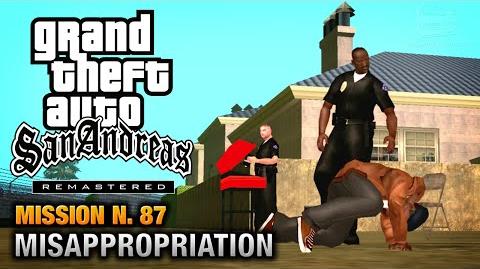