Location on the map (red). The Mirror Park Railyard in the left is also referred to as Mirror Park in the in-game GPS.

Mirror Park is a suburban neighborhood and park in Grand Theft Auto V and Grand Theft Auto Online located in East Vinewood, Los Santos. The neighbourhood is bordered by the Tataviam Mountains to the east, Murrieta Heights to the south, the rest of East Vinewood to the west, and the Vinewood Racetrack to the north.

Mirror Park, like the rest of East Vinewood, is home to post-ironic hipsters driving Issis and drinking Bean Machine coffee. The area is based on Echo Park and Silver Lake in Los Angeles, known for having a high concentration of hipsters in residence.

Mirror Park is primarily middle-class. The houses are average-sized, and most of them are situated around the park or up in the elevation, while some homes are also under construction. Many of the houses in the area are also being rented out by Wolfs International Realty, probably due to gentrification.

The layout of Mirror Park is quite simple. In the centre of the neighbourhood- is the park itself. The streets surrounding the park are all lined with small houses. In the eastern end of Mirror Park, there are two cul-de-sac roads; one fully developed with occupied homes, and a second still under development with homes in various states of completion. In the south-east end of the neighbourhood, there are a section of streets made up of various different businesses; this serves as an area of commerce. There is also a Limited LTD Service gas station that comes with a convenience store located at the northern edge of the neighbourhood. Also situated in the north is one of two main sources of the Los Santos Storm Drain. Maintenance workers can be seen operating the machinery of the canal.

Unlike Glen Park, the 3D Universe equivalent of the district, Mirror Park is much more gentrified and has much lower crime rates.

Mirror Park is not served by the Los Santos Transit's metro lines, although there are still several bus stops along the neighbourhood. Buses can be seen frequenting here. The Freight Train goes through an underground tunnel just under the neighbourhood. 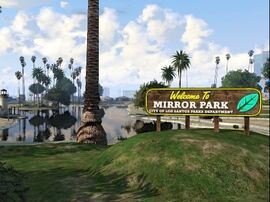 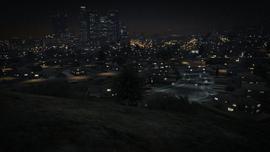