Between 2008 and 2013, her appearance is drastically altered.

In The Ballad of Gay Tony she is blonde and appears much younger and thinner.

In Grand Theft Auto V, she's one of the honored celebrities on the Vinewood Walk of Fame.

According to a radio report after Beverly Felton's first mission, she was once a very prominent television actress whose career has been on the wane in recent years. During the mission, Beverly makes reference to rumors that she was once film director Mark Fostenburg's mistress, and the affair caused Fostenburg and his then-wife to divorce.

Miranda's only appearance in TBOGT, was in one of the trailers for the game. The trailer is a report from the show Fizz!, in which they describe the nightlife of Liberty City. She appears as one of the many celebrities that frequents the Bahama Mamas nightclub.

She reappears in GTA V, where she is constantly followed by the paparazzi. She was featured in the article Her Last Shred of Dignity by the Prattle magazine.

Crazed paparazzo Beverly Felton and Madison Fox photographed her doing drugs inside her Stretch, but the reaction of the media was lukewarm at best due to becoming used to her attention whoring antics.

She is portrayed by actress Charlie Fleming in the film Meltdown as antagonist Abner Fitch's significant other.

Miranda returns in GTA Online as part of the GTA Online: After Hours update where she is one of the celebrities the GTA Online Protagonist can be tasked with delivering to their nightclub to increase its popularity. She will then be found inside the nightclub for a period of time, dancing in the VIP lounge area.

During her appearance, she and her assistant discuss an offer from Waning With The Stars for her to star in her own spinoff reality show, and that they would offer her a bonus if she went to rehab during the show. 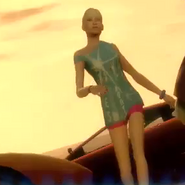 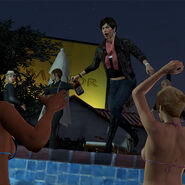 Miranda's star on the Vinewood Walk of Fame.

Being pursued by the paparazzi.

Miranda and her assistant on the way to a player's nightclub.