Rail Gun at Ammu-Nation
(enhanced version only)
Homing Launcher at Ammu-Nation
Ability to play as Michael and Trevor again
Free Parachutes when entering any aircraft.

“But I heard about something to do with Merryweather. A big cache of weapons they got coming in, so I thought you might want to, err... requisition it.”

Minor Turbulence is a mission in Grand Theft Auto V that protagonist Trevor Philips performs independently. Despite being one of Trevor's missions, the mission can only be triggered at the De Santa Residence by Franklin Clinton.

Franklin arrives at Michael De Santa's house looking for him. After discovering the house is empty, Franklin phones Michael, who explains that he and Trevor are currently exiled in Sandy Shores after Trevor's kidnapping of Martin Madrazo's wife Patricia. Once their conversation ends, Michael speaks with Trevor, Patricia, and Ron Jakowski. Trevor asks Ron about Trevor Philips Enterprises. Ron tells Trevor about a potential plot involving Merryweather Security and a large cache of weapons.

Trevor and Ron drive to McKenzie Airfield in Grapeseed, where Trevor takes control of a Duster. Trevor flies towards a Merryweather cargo plane circling near Fort Zancudo. In order to avoid the fort's radar, Trevor flies low to the ground when following the plane along the coast of San Andreas. Once Trevor clears the fort's airspace at Braddock Pass, he approaches the cargo plane.

As Trevor approaches the plane, the pilot orders Trevor to divert course several times before engaging. After Trevor ignores the pilot's orders, the pilot opens the rear doors of the cargo bay and Merryweather agents begin firing rockets and shooting at the Duster. Trevor crashes the Duster into the cargo bay, then fights his way past Merryweather mercenaries and sliding Merryweather Mesas to the plane's cockpit where he kills the pilot. Trevor takes control of the aircraft and attempts to fly it back to McKenzie Field. However, he is soon intercepted by two US Air Force fighter jets, who have been sent to escort the plane to Fort Zancudo. Trevor refuses to obey the pilots' demands, resulting in the jets firing missiles at the cargo plane and destroying one of its starboard engines. Forced to bail out, Trevor grabs a parachute and bails out (either using a Merryweather Mesa or jumping from the cargo bay). Trevor parachutes to safety as the plane crashes into the Alamo Sea.

"A Merryweather cargo plane shot down by military fighter jets. The U.S. Air Force has shot down a Cargo Plane believed to be carrying a large shipment of weapons for controversial private security firm Merryweather. The reasons for engagement are unclear, but some in congress will doubt the wisdom of allowing Merryweather to operate on U.S. soil."

"Merryweather might just have found an unlikely enemy in their domestic expansion plans: The U.S. Air Force. The news that a Cargo Plane carrying Merryweather operatives and weapons was shot down by military jets certainly suggests that the two perhaps aren't coexisting as harmoniously as the government would like us to believe. Our doubts about private sector security are being fully realized."

Cargo plane flying over Los Santos in the enhanced edition of GTA V.

The damaged Cargo Plane descends towards the Alamo Sea. 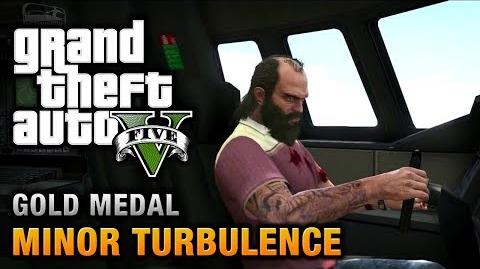 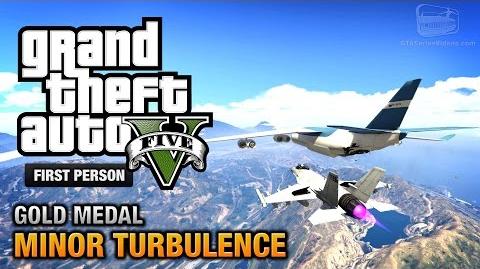 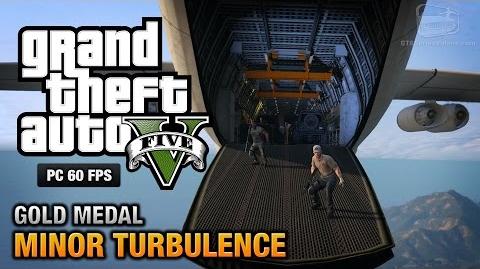