"It takes a brave man to look beyond the inmense weight and astonishingly poor aerodynamics of this monument to the nuclear family. It takes a visionary to see that if there's enough room for two deranged parents and five critically sedated kids, there's enough room for a speaker set that's so big it's a threat to local infrastructure. And it takes someone uniquely rich and stupid to make all that happen. That's right, your time is now."
―Benny's Original Motor Works description.

The Vapid Minivan Custom is a four-door lowrider-style minivan featured in Grand Theft Auto Online as part of the Lowriders: Custom Classics update, released on April 12th, 2016, during the Adversary Modes Week event.

The Minivan Custom brings only minor changes by default. In the side profiling, changes have been made to the suspension system, where the ride-height is lowered, and the wheels have been cambered negatively for stability and traction purposes, as well as further expanding suspension capabilities. The tyres are now white-wall by default, as with all lowriders. The vehicle gets custom lowrider wheels with updated tread.

The vehicle retains its original front and rear fascias, and side body profiling has received only minor changes. The rear doors are now sliding and therefore the hinge system has been altered and the door handle has been moved to the front of the door.

The rear features no changes, except hydraulic pumps which have been installed in the trunk, and the removal of the "24v" badge (which is now featured only on the front grille). Many of the interior feature's colors are part of the primary color of the vehicle, including the steering wheel and seats.

Its underside is now fitted with a paintable frame and has a visible driveshaft, a different exhaust setup (dual pipes instead of a single Y-splitted pipe) and visible hydraulic bars connected to the suspension.

The vehicle has upgraded performance in stock form, where acceleration has minor improvements. Due to the low ride height, the vehicle has a tendency to get caught on curbs, however the turning radius is now improved thanks to the cambered wheels, which can subsequently fix this issue. Braking and deformation have received no changes. Its top speed appears to have been increased slightly, and its curb weight seems to have been reduced. 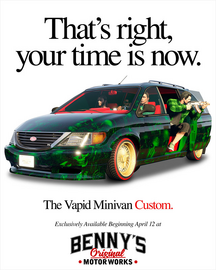 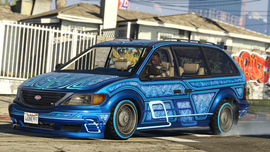 Official screenshot of the Minivan Custom.

Retrieved from "https://gta.fandom.com/wiki/Minivan_Custom?oldid=1185740"
Community content is available under CC-BY-SA unless otherwise noted.