saloon_2_eur_v6 (GTA V)
“Efficient, practical, reliable, squarely middle-class. It won't get you laid but, let's face it, if you're shopping for a minivan you gave up on that a long time ago.”
— Southern San Andreas Super Autos description.

The Minivan appears as a full-size four-door minivan apparently based on the 2001-2007 Dodge Caravan, suggested by its overall shape, all the way down to minor details such as its A-pillar mounted mirrors. Deviations from the Caravan include frameless windows, its grille, taken from the similar Chrysler Voyager (US model), and its rear end and tail-light cluster which takes after the 1999-2003 Ford Windstar. The Minivan has regular doors as opposed to sliding doors, similar to the first-generation Mazda MPV and Honda Odyssey minivans.

The Minivan appears to replace the Blista's role in Grand Theft Auto III and Grand Theft Auto: Liberty City Stories as a minivan, alongside the Perennial. It features a bulky bumper, a black grille sporting a small "24v" badge, and large headlights with small turn signals on the edges. Its hood is relatively small, with a curved design and elevation. The sides feature flared arches and thin ridges running from the front arches and towards the rear, along with "Minivan" badges on the side skirting. The cabin area is prominently large, with black trim and rounded rear-view mirror shells. The windows themselves are large, with the passenger doors and rear compartment windows being always tinted. The rear features a large compartment door holding the license plate and the corresponding "Minivan Sport" and "24v" badging on the lower sides, while the outer edges house the tail lights. Another bulky bumper protects the rear end.

The van may appear with additional roof bars or a roof spoiler. The Minivan is only set to spawn in a variety of single colors, but through the use of trainers, it is revealed that the secondary color is applied on the lower body, front and rear bumpers. The Minivan uses a unique set set of 5-spoke dual rims.

The Minivan is equipped with a GPS system with a male voice, but only if the player leaves the "selected cars" (default) option in the audio menu.

The Minivan returns in Grand Theft Auto V and Grand Theft Auto Online mostly unchanged from its appearance in GTA IV. One of the most notable model changes includes the wheel arches and side skirting, which appears to be far more pronounced than it was in GTA IV; the side skirts also bend slightly at the rear arches, while in GTA IV they do not. Compared to its previous single exhaust configuration, the car has a dual-exit exhaust setup. The vehicle also lacks the permanently tinted rear windows. The door handles are no longer inset within the door itself and are instead placed on top. Other changes include improved light and glass textures.

In the enhanced version of the game, the car gains a higher quality Cavalcade-based interior. The interior is heavily based on the interior found in both GTA IV and the original version of GTA V. It does not have any interior extras.

The car's dual paint colors is carried over unchanged from GTA IV. With new spawning colors, several of the car's spawning colors have "black" or "graphite" as their secondary color, allowing the car to spawn with dark lower bodywork and give the appearance of a basic model. Its wheel design was carried over from GTA IV, and is also replicated on vehicles like the Stanier, the Asea and the FQ 2.

In GTA V, the Minivan and its custom variant are the only vehicles of their body-styles.

The Vapid Minivan is powered by what sounds to be a reasonably quiet "24v" (24 valved) engine, supported by its badging.

The Minivan in GTA IV has reasonably good suspension and impressive braking. The Minivan has a surprisingly high top speed thanks to the flat-plane engine, however, the time at which it takes to reach such speeds is let down due to its weight. The car also has limited traction, meaning setting off, particularly on grass, or on a steep gradient, can be near impossible if the throttle is pressed down in a sudden instance or too much-too soon.

The car's rear wheel drive layout still helps it off-road and on-road, allowing it to gain some control after an incident; enough to allow movement or recovery, however, the traction from the wheels doesn't work in harmony with the all wheel drive, which can be considered a let down for the vehicle.

All in all, the vehicle is not a recommended pick for any excessive use, such as pursuits, but it a reasonable car for getting from one place to another in no rush.

The Minivan in GTA V and GTA Online assumes the same engine model and cover as the Minivan in GTA IV, indicating no initial engine changes have been made during the cross-over. The engine now sounds similar to the engine found in the Primo in GTA V. Although the engine and the vehicle's AWD drivetrain work hard to propel the Minivan off the line, its sluggish 4-speed transmission combined with immense weight severely limits overall performance, not making the Minivan an ideal getaway vehicle, especially under hot pursuit. Though the output of this smooth-yet-potent engine is far from optimal, the sheer weight and aerodynamic properties of the Minivan results in low speeds. The firmness of the suspension, its AWD drivetrain and the rather low ride height give the Minivan ample support and stability when cornering, though under-steer is often noticeable. Braking is good, and ABS is standard on all models.

In the event of a crash, the bodywork tends to stay very well intact, although driver safety is not exactly class-leading in high-speed accidents. Although it was never intended for this purpose, if the player ever find him/herself off-roading in a Minivan, whether taking a shortcut or trying to escape from attackers, be wary of steep hills and uneven ground. While the minivan lacks the necessary power for excessive spinouts, it does not provide enough torque evenly to its rear tires to avoid getting stuck on even rather shallow hills or get over small obstacles. 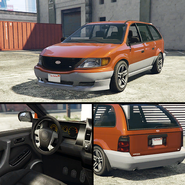 The Minivan on the updated Rockstar Games Social Club.

The Minivan in the cinematic preview on GTA V Rockstar Games Social Club.

The Minivan in the cinematic preview on GTA Online Rockstar Games Social Club.