Also, despite the player being unable to obtain one, Grand Theft Auto IV and its Episodes included a vehicle mounted version on the Annihilator and Buzzard attack helicopters. It was meant to appear in the game, but was cut during development.

The Grand Theft Auto: Vice City and Grand Theft Auto: San Andreas renditions are based on a man portable version of the M134 Minigun, whereas the Grand Theft Auto: Liberty City Stories and Grand Theft Auto: Vice City Stories versions are based on the M197 tri-barreled Gatling or the GAU-19 heavy machine gun. It has an incredible rate of fire and can annihilate most vehicles in almost less than a second around a certain radius. In Vice City, the minigun mows down targets level with the player; however, it is impossible to aim manually. Instead, it shoots upwards automatically towards helicopters, for example, similar to the Rhino. In GTA San Andreas, thanks to the new aiming system, it is possible to aim the minigun in any direction, making shooting higher targets much easier, but also dangerous if the target aircraft may explode and fall on the player. It is almost 100% accurate as there is no recoil, but it can't lock on to a target which isn't much of a problem due to the very high power of each individual round and the amount of ammo it carries. In San Andreas, the gun can only be found at spawn points (or provided during missions) and cannot be purchased at Ammu-Nation. In San Andreas, a mounted Minigun is used in several missions with unlimited ammunition. These missions include Air Raid, The Da Nang Thang, and Up, Up and Away!.

For Grand Theft Auto IV, the minigun was planned to be the second heavy weapon, the first one being the rocket launcher, but it was dropped in the end, due to unknown reasons. By using the remaining data in-game, it appears to carry 750 rounds and to be able to kill any person (armored or not) with one shot, making it the most powerful weapon in the game. However, the minigun is mounted on Annihilator and Buzzard helicopters. Both fire normal 7.62×51 millimeter cartridges, but the Annihilator fires 800 rounds per minute, which is unrealistically slow, by about 3,000 rounds per minute. This is probably to prevent helicopter pilots from being able to literally shred players and vehicles. The Annihilator rendition of Grand Theft Auto: Episodes from Liberty City has an increased top speed and features miniguns with highly explosive cartridges that tear pedestrians, cars, motorcycles, and even other helicopters and boats apart. On the Buzzard, which only appears in The Ballad of Gay Tony, there are 2 miniguns mounted, which do not overheat or need to reload and fire about 4,000~6,000 rounds per minute.

The minigun returns in Grand Theft Auto V. The minigun is coloured grey and appears to be of a smaller model compared to previous games, and appears to have a trigger group somewhat similar to the KAC ChainSAW. Unlike in the previous games, the minigun does not reload, but instead the belt size depends on the "maximum ammunition" of the weapon, which can be increased to up to 9,999 rounds when the shooting skill of the playable character is at its maximum. Furthermore, its rate of fire is increased to 3,000 rounds per minute (twice as the one in the 3D uiverse games).

Compared to its 3D universe iteration, it is significantly less powerful, dealing only half of the damage of the 3D Universe minigun per shot. However, considering its very high fire rate, it deals tremendous damage per second. It will not directly kill NPCs with one shot, but will kill them very quickly. Against vehicles, continous fire will quickly set the engine on fire and destroy it, instead of almost directly exploding them like in the 3D Universe. Lacking automatic aiming and cover, the minigun is not suited for fighting enemies on foot, but has great results against helicopters, planes, motor vehicles and multiple enemies.

The Buzzard returns in GTA V with usable miniguns.

The minigun is also available in Grand Theft Auto Online. It is unlocked at level 120, and is the last weapon unlocked by the player.

It also spawns during survivals at waves 7+ and are common among enemies at this point. Taking a spawned minigun at wave 7 grants 1500 bullets (3000 if the minigun is already unlocked), this amount of ammo being instantly lowered.

The Buzzard and the Annihilator are equipped with miniguns. The Heists Update later introduced the Valkyrie and the Savage, both having the use of miniguns, the latter using explosive rounds. The Executives and Other Criminals update also added the Turreted Limo, which has a usable minigun on its roof.

A rare Golden Minigun inside a Weapons & Ammo crate can be purchased through the SecuroServ network for $23,000. It is apparently made of 24 karat gold and cannot be used as a conventional weapon. It can be sold for $115,000. Interestingly, Brucie Kibbutz appears to be the buyer, as the company interested in purchasing the item is called 'BK Exec Lifestyle Ltd'.

Mike with a Minigun.
MinigunVC.JPG
Tommy Vercetti using the Minigun. 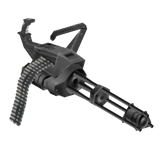 The Minigun as seen in a GTA V official trailer.

GTA V (enhanced version)
Add a photo to this gallery

Note: the minigun uses the same weapon slot as the rocket launchers and flamethrower, and will therefore be replaced should any of those other weapons be equipped, such as during a mission.

Retrieved from "https://gta.fandom.com/wiki/Minigun?oldid=974671"
Community content is available under CC-BY-SA unless otherwise noted.