Mimes are a unique type of pedestrians in Grand Theft Auto V, appearing as soapboxers.

Mimes in GTA V are depicted as African-American people. One can be found performing at the Prosperity Street Promenade in Del Perro. People will usually ignore the mime but sometimes, they may be seen taking pictures of him. The player is unable to speak to the mime, but the player can cause the mime to shout insults at them if they anger them somehow. He was voiced by Gregg Goldston.

The next-gen trailer showed a mime performing at the Vespucci Beach Sidewalk Market. They can also be placed in the Capture Creator. 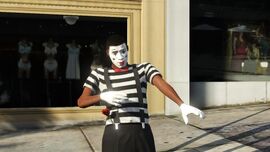 A mime performing on a street. 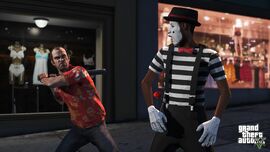 Trevor attacking a mime with a baseball bat.