No
“This immensely powerful assault rifle was designed for highly qualified, exceptionally skilled soldiers. Yes, you can buy it.”
— Ammu-Nation and Social Club description.

The Vom Feuer Military Rifle is an assault rifle that appears in Grand Theft Auto Online as part of The Cayo Perico Heist update.

The Military Rifle is a bullpup rifle that appears to be largely based on the Steyr AUG A3, with influences from the KH-2002.

Markings on the barrel indicate that it is property of the Government of San Andreas.

The Military Rifle is a versatile weapon that features higher damage with a similar output as other rifles.

It has an elevated damage profile compared to the Carbine Rifle Mk II (37 vs 33). However, it is still outclassed by the Assault Rifle Mk II and Combat MG Mk II in raw damage (37, 40 and 47 respectively), and weapons such as the Advanced Rifle and Bullpup Rifle Mk II have the edge with a faster rate of fire.

Additionally, it lacks the ability to sustain fire for long periods of time due to the extended clip attachment only yielding a 50% increase in capacity (From 30 rounds to 45 rounds, compared to the average 60 for other assault rifles), which will increase the frequency of reloading and limits its total output.

Overall, the Military Rifle falls within the middle ground of its class. While it has high recoil and decreased accuracy compared to its competitors, it compensates with above average damage and rate of fire. 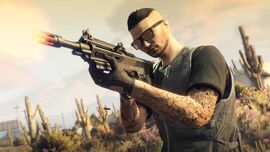 Official Newswire screenshot of the Military Rifle, incorrectly labeled as the Combat Shotgun.