• ­Get back in the vehicle carrying the hardware. [?]

• ­Take out the remaining guards.

• ­The hardware was abandoned.

• ­The convoy reached the base.

• ­The transport truck was destroyed.

• ­The transport truck got stuck.

The Paleto Score (If Predator has been completed)

Military Hardware is a Heist Setup in Grand Theft Auto V. The player must complete it in preparation for The Paleto Score. Either Michael De Santa or Trevor Philips will be able to conduct this mission.

The player must stop a military convoy which consists of a Barracks and two Crusaders. It is travelling through Grand Senora Desert, heading past Great Chaparral. In preparation for the heist, the player must steal the Barracks containing two crates of military hardware and lose any pursuing Military. After the hijack, the truck needs to be taken to the meth lab and parked behind Trevor's office. A few moments later, the player will call Lester and update him. The mission is then complete and the heist is ready.

The truck cannot be towed with a Towtruck and cannot be picked up by a Cargobob. It can tolerate more collisions than regular Barracks' but can still be destroyed. The mission can be started with a wanted level, but the wanted level will be removed instantaneously. During the mission, the player cannot obtain a wanted level unless they enter Fort Zancudo. Trevor and Michael can also enter Los Santos during this mission, and Martin's goons will not give chase.

There are two possible routes for the convoy to follow, of which one will be chosen at random. One begins just south of Harmony along Senora Road. The other will start on Calafia Road and drive along Zancudo River before merging with the main road. Both routes will meet at Fort Zancudo Approach Road and head into the base. The guards equip Pistols, Carbine Rifles and SMGs.

If the player fails or dies and retries the mission, they will respawn in Great Chaparral and the convoy will spawn on the dirt road near Ortega's Trailer.

The soundtrack that plays during Military Hardware is titled "Heist Paleto Prep A" and is unique to this mission. It is very similar to Heist Paleto Setup which plays during the Paleto Score Setup but lacks background noises. The soundtrack will play continuously throughout the mission and doesn't have any dynamic range. 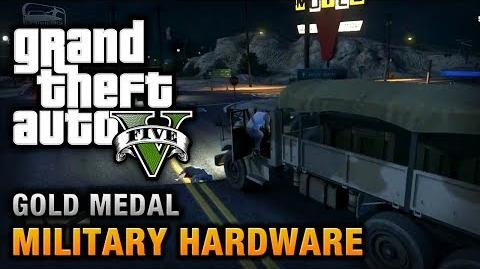 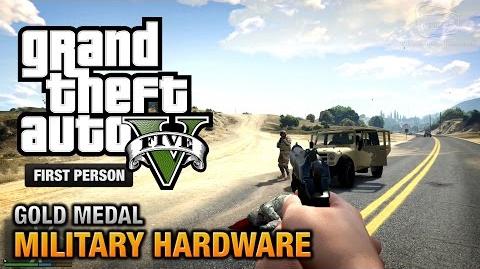 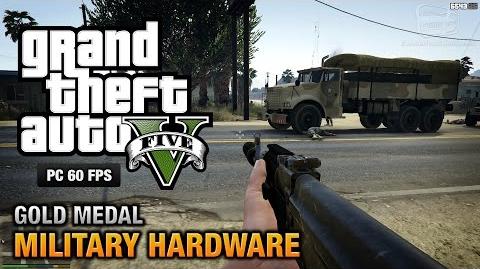 Retrieved from "https://gta.fandom.com/wiki/Military_Hardware?oldid=1088671"
Community content is available under CC-BY-SA unless otherwise noted.