Karel Roden
“I am a man of convictions, I have only done what I believed. None of you will survive in this country without me! This American greed takes everyone. It is like a disease. Only I am still sane!”
— Mikhail Faustin in the mission The Master and the Molotov.

Mikhail Faustin was born and raised in the Soviet Union. He met a man named Dimitri Rascalov while serving in the military during the Cold War in 1987, and they were later cellmates in a Siberian prison camp. Both he and Dimitri have tattoos on the palms of their hand which represent that they are "brothers for life" (many initiated members of his organization have the same tattoo later on in time.) It is apparent that Mikhail protected Dimitri from being raped in prison (which he will sometimes remind Dimitri of in order to force him into following orders.) In 1988, when Mikhail was twenty-five, his future wife Ilyena gave birth to their daughter Anna - Ilyena was only eighteen years old at the time of their baby's birth. Ilyena reminisces that Mikhail was "beautiful" at this time, before he became possessed by anger. Dimitri also talks of Mikhail in a more positive tongue. When the Cold War ended in 1991; both Mikhail and Dimitri began selling hashish to tourists in Red Square, Moscow. Both men had multiple murder convictions by this time.

Mikhail "exploited a loophole in the immigration treaty to gain US residency in the late 90s" - relocating to Hove Beach in Liberty City with Dimitri, Ilyena, and Anna. Men who had worked for Faustin in Russia had travelled to Liberty City too. He quickly established a foothold for his organization in Hove Beach, and he was eventually arrested in 1998 for extortion. His enterprise was made up of several investments - the Perestroika cabaret, protection rackets, cocaine distribution, pornography, and stolen goods (which he was arrested for in 2002). His life of crime provided him with a lavish lifestyle, consisting of a large home in Beachgate, and two luxury cars (a Turismo and a custom black Schafter.) Mikhail was able to offer his daughter a privileged lifestyle, and claims to have spoiled her as she grew up.

He began to frequently abuse cocaine and alcohol - likely since 2005. Ilyena and Dimitri grew accustomed to Mikhail's disturbing new personality by 2008, which was probably caused by his drug habits. Mikhail became abusive and unfaithful towards his wife, as well as stern towards Anna. He is very stubborn and refuses to take advice from his peers, particularly Dimitri.

Examples of his violent streak include the murders of Andrei (a member of the organization in which Dimitri favored), Jason Michaels (a member of The Lost Brotherhood who was dating Mikhail's daughter) and Lenny Petrovic, the son of another Russian crime lord, Kenny Petrovic.

Among other violent, rash moves, Mikhail called for the death of Lenny Petrovic, who was the son of the most powerful Russian mob leader in Liberty City, Kenny Petrovic because he assumed that Lenny has snitched on him. This results in an all-out war between the two Russian factions. Kenny contacts Dimitri and explains that setting Mikhail up to be killed will ultimately restore order. Dimitri agrees to betray Mikhail, and tells Kenny that the man who eliminated his son was a "hired gun" who had no affiliation with Faustin's organization, in order to keep Niko safe from harm. Kenny tells Dimitri that he who killed his son, must be the man to kill Mikhail Faustin.

Niko immediately goes to the Perestroika, where he finds Mikhail. After a bloody shootout between Niko and members of Mikhail's gang, Mikhail is finally meets his maker on the rooftop, where he falls to his death after being shot.

While Dimitri and Ilyena have both said Mikhail was once a well-mannered person despite having a temper, he gradually developed a very short and volatile temper, possibly exacerbated by his alcohol and cocaine abuse. This resulted in him becoming extremely violent and making drastic decisions, such as casually ordering Niko to murder his enemies on the spur of the moment. These decisions would eventually be his downfall and lead Dimitri, his closest friend and ally, to order his execution.

NOTES
- Prior murder convictions in Russia.


- Exploited a loophole in the immigration treaty to gain US residency in the mid 90's.
- Believed to have taken control of Russian Organized Crime in Hove Beach area.
- Several legitimate business interests including his cabaret club, Perestroika.


- Resides in Beachgate with his wife and daughter. 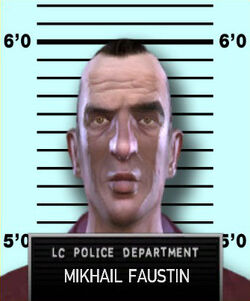 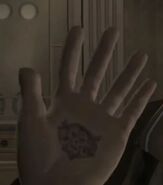 Faustin's tattoo on his palm representing "brothers for life".

Faustin in the mission Rigged to Blow (GTA IV).

Faustin about to go on a shootout with Niko. (Mission: The Master and the Molotov)

Faustin's last moments. (Mission: The Master and the Molotov)

Faustin falling to his death. (Mission: The Master and the Molotov)

Faustin's execution. (Mission: The Master and the Molotov)