• ­Use the reading from the SIGNAL bar to find the van.

• ­Get the hell outta here before the cops come!

• ­Get Toreno away from the burning van before the cops arrive.

• ­Get back to the Pleasure Domes.

"Hey holmes, Mike is in trouble. Let's Bounce. They taking the yay shipment and the van, and Mike's still in the back!"
―T-Bone Mendez

T-Bone is convinced that the Loco Syndicate are being monitored. At that point, Mike Toreno calls T-Bone and explains that he is in danger and needs assistance. T-Bone informs Carl and Jizzy that the van containing the drug shipment has been stolen with Toreno still inside. Toreno informs T-Bone that his phone battery is running low, and he will provide directions until it runs out. Carl drives T-Bone to the locations given by Toreno, and finally locates the van at Easter Bay Airport. Guided by Toreno's now-working transponder, Carl and T-Bone locate the van and rescue Toreno from the Da Nang Boys. Toreno exits the van and, not knowing Carl, holds him at gunpoint, though stands down when T-Bone explains who he is. Toreno explains that the police will be searching for the van and they must destroy the van with the shipment inside, despite T-Bone's reluctance to do so. Carl destroys the van and drives Toreno and T-Bone away from the airport. After losing the police, Carl drives Toreno and T-Bone back to Jizzy's club.

Mike Toreno after being released inside the van.
Add a photo to this gallery 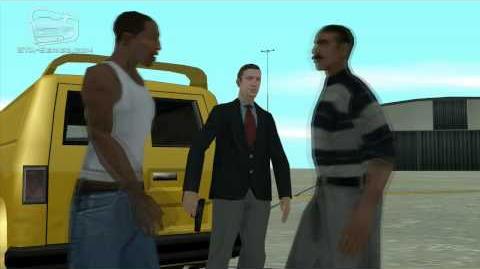 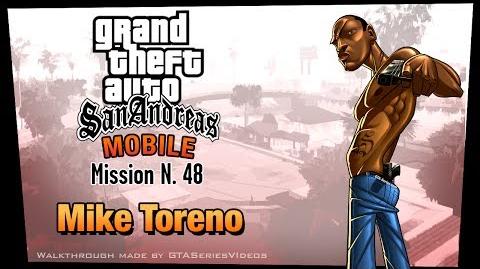 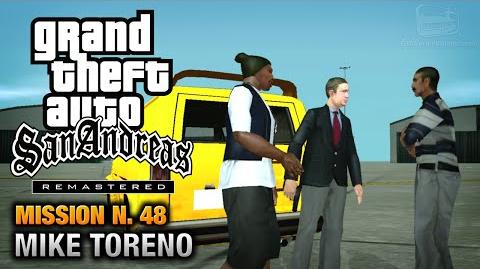 Retrieved from "https://gta.fandom.com/wiki/Mike_Toreno_(mission)?oldid=1239973"
Community content is available under CC-BY-SA unless otherwise noted.