Not much is known about Miguel's past, but that he is the son of Martin Madrazo and his wife Patricia Madrazo and heir to the Madrazo family's empire. [2] He attended ULSA alongside family friend Kaylee, after Patricia and Jackie, Kaylee's mother, contended with the university dean and paid "a fortune" to have their children admitted.

In late 2020, Miguel contacts the protagonist, on the recommendation of his father, and asks them to meet him at The Music Locker in East Vinewood to discuss a job. His family is having some disagreements with the Colombian narco-trafficker Juan Strickler, better known as "El Rubio", who has managed to get hold of "decades' worth of intel" on his family, so he hires the protagonist to raid his compound in Cayo Perico off the Caribbean coast of Colombia, and bring back the files. El Rubio is holding the intel over the Madrazos' heads, and is threatening to leak it to the DEA unless they agree to renegotiate their prices. Miguel also states that he refuses to allow this to bring down his family and make him look weak in front of Martin.

Later on, Miguel pays the protagonist a visit at their Kosatka right before the heist, claiming that he'd have done this himself but preferred paying people to do this for him. Once the heist was carried out, Miguel congratulates the protagonist on a job well done and make a phone call to inform his father that the evidence's been dealt with. Much to his horror however, Miguel discovers that the evidence hidden on the island included salacious photos of his mother and Trevor Philips, and immediately burns them along with the other files.

After the initial heist, Miguel remains in contact with Pavel and continues supplying information on El Rubio's shipments and securities, allowing the protagonist to keep robbing Cayo Perico as they please. He can subsequently be found partying in the VIP lounge of The Music Locker with Patricia, Jackie, Jorge, and Kaylee.

If the player carries out subsequent heists alone, he will also be seen drinking tequila with the protagonist in the celebratory cutscene after the post-mission reward screen.

In 2021, Miguel represents the Madrazo family and enlists KDJ's help to broker a deal with a crystal vape dealer. However, the dealer betrayed them and sold the formula to the IAA instead, so Miguel puts out a contract to track down the guy and recover the recipe. After some planning work, the player successfully breaks into the IAA headquarters and forces the dealer to give up the recipe, which they then bring to Miguel at his mansion in Vinewood Hills.

Miguel's Tyrant (custom license plate MADRA20) can be found randomly inside the LS Car Meet warehouse, meaning that he owns a membership. He also owns a yellow Emerus, as seen in The Agency Deal finale.

Because of his status as "Heir to the Empire" in the Madrazo Cartel, Miguel is one of its most senior members and his personality does a good job of reflecting it. When he first meets the protagonist, Miguel talks about how his father, Martin, is "old school" whereas he's got big "plans" for the future and refers to himself as "Madrazo 2.0." This is an indication that he has a very high opinion of himself and believes that he can make a very positive contribution to his family's "business" because he is young, educated, optimistic, and has a different mindset from that of his dad.

When he starts talking about El Rubio and the latter's recent attempts to blackmail the Madrazos with "evidence" kept on Cayo Perico, Miguel appears to be quite annoyed. He's quick to claim that there's no way he will allow somebody like Strickler to make a fool out of him or his family. Obviously insulted by what Strickler is doing, Miguel effectively orchestrates the events of The Cayo Perico Heist. First by introducing the protagonist to Pavel and then by offering to pay them a lot of money for successfully robbing El Rubio's island and retrieving the "evidence" from his compound. Miguel also doesn't seem to be above holding grudges because after the protagonist returns, he's quick to encourage them to continue robbing from Strickler as many times as their heart desires. During subsequent heists, Pavel often mentions that Miguel has supplied him with information on where to source certain kinds of equipment or that Miguel's associates have offered to "look after" various approach vehicles that the protagonist steals like the RO-86 Alkonost or the Kurtz 31 Patrol Boat.

It is implied that Miguel Madrazo is also very naïve. The first time that players complete The Cayo Perico Heist, a cutscene plays where Miguel pays a surprise visit to the protagonist's Kosatka right before the start of the heist and nearly makes the fatal mistake of "flooding the boat," according to Pavel, when he starts messing around with the sub's various buttons and switches.

Miguel shares a very close relationship with his mother, Patricia, and spends a great deal of time with her although he does show some annoyance and embarrassment of her behavior when she's been drinking. However, the relationship that he shares with his father appears to be a lot colder and distant, but Miguel doesn't want it to be that way. He himself states that one of his motivations for taking care of El Rubio's blackmail info is so he won't look weak in front of his father, demonstrating that Martin's opinion of Miguel is very important to his son. As shown when he calls Martin over the phone after the protagonist returns from Cayo Perico with the "evidence," Miguel is very enthusiastic at first when emphasizing that he is still deserving of his dad's love and acceptance because he succeeded in accomplishing what Martin wanted. However, the moment Miguel attempts to change the subject and share some of his big "plans" he is immediately cut off because Martin hangs up without saying another word. Miguel's personality suddenly goes through a dramatic change following this. His smile fades away, all of his enthusiasm disappears, and he looks as though he's taking his father's latest "rejection" of him very hard. The lack of "connection" between father and son is made even more ironic by the fact that Miguel is Martin's heir and thus the one who will one day succeed him as leader of the Madrazo Cartel. In order to avoid making the situation look awkward in front of his party guests, Miguel changes tactics and immediately stops speaking about his dad and orders his bodyguard, Jorge, to pay the protagonist for their services. 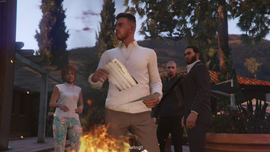 The files being burned, including a Union Depository memo. 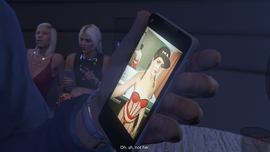 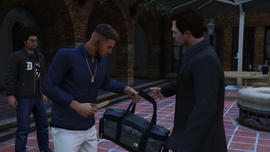 Miguel in The Agency Deal. 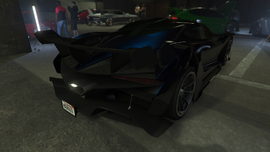 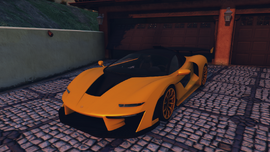