View source
watch 02:56
Raise a Floppa - The Loop
Do you like this video?
Play Sound
For the character in Grand Theft Auto Online, see Miguel Madrazo.
Definitive Edition

Spoiler Warning: Plot details, ending details, or both are in the text which follows.
“I'm sorry about the crazy bitch, amigo. They're all the same... please? por favor??”
— Miguel to Claude in the mission Grand Theft Aero.
“Heh heh ha! I like you, Toni. You got big balls - like a bull!”
— Miguel to Toni Cipriani in the mission Contra-Banned.

Miguel is co-leader of the Colombian Cartel along with Catalina, and is involved in the gang's narcotics trade.

Miguel was born in Colombia and at some point prior to 1998 moved to Liberty City, where he joined Colombian Cartel and soon became a prominent member of the gang.

Miguel frequently sells drugs from Portland Harbor to the Leone Family and meets Toni Cipriani in a deal in 1998, which is ambushed by the Liberty City Police Department. Toni escapes with the drugs after seemingly killing Miguel, but he manages to survive.

Over the next three years, Miguel continues to climb the ranks of the Cartel and, following the death of Cisco in 2000, becomes one of the gang's co-leaders.

In 2001 Miguel meets Catalina and Claude as they arrive in the city and helps them rob a bank as their getaway driver. After Catalina shoots Claude and leaves him for dead, Miguel escapes the police with Catalina. Catalina and Miguel then continue leading the Cartel together and increase the gang's influence in the city by stepping up the production of the drug SPANK from a freighter in Portland Harbor. They also begin to work against the Leone Family, exchanging Leone secrets for SPANK with barman Curly Bob. Their operations, however, are stopped by Claude who, under orders from Don Salvatore Leone, kills Curly Bob and then destroys the freighter containing the SPANK factory.

Claude later moves to Staunton Island, where he begins to work for Donald Love, first rescuing the Old Oriental Gentleman from the Cartel. Love later sends Claude to collect a package from an incoming plane at Francis International Airport and later has him return to collect the real package, having previously sent Claude to collect decoy packages. The package, however, has already been collected by Miguel and Catalina. Claude goes to a construction site in Fort Staunton and confronts Miguel and Catalina. Miguel attempts to reason with Claude and gives him the package, but is then betrayed and shot by angry Catalina, who jumps down into a skip to escape.

Asuka Kasen, enraged following the death of her brother Kenji at the hands of a "Cartel assassin" (actually it was Claude disguised as a Cartel member), begins to torture the injured Miguel for information on the Cartel's operations. After extracting information from Miguel, Asuka sends Claude to stop these Cartel operations, which includes killing three Cartel hit squads, destroying the Kappa Coffee House stands (which were fronts to sell SPANK) and destroying a plane and collecting the SPANK packages inside. After collecting the SPANK packages, Claude returns to the construction site and finds Asuka and Miguel dead, who were both killed by Catalina (or by other Cartel members) in an attempt to stop Claude's attacks on the Cartel. Claude then investigates Miguel's body, which has been impaled on a construction pole, and finds a note from Catalina attached to it, before leaving. 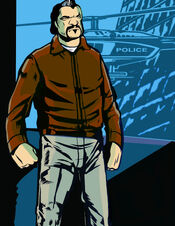 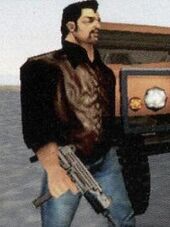 Beta version of Miguel in the GTA Liberty City Stories.