In 2009, the Midtown Gangsters are located in the borough of Bohan in Liberty City. For many years, the group had been allied with the Angels of Death and Triads in Liberty City. However, after a Triad deal went bad, the Korean mob were suspected of being one of the groups responsible, leading to a series of confrontations with the Triads that left the Midtown Gangsters seriously weakened in both manpower and assets. A final attack at their main base finally put then out of the fight.

It is later revealed that a splinter group within the Triad was found to be behind the event. 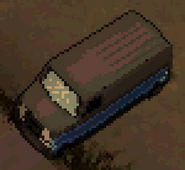 A Midtown Gang Burrito.
Add a photo to this gallery

Retrieved from "https://gta.fandom.com/wiki/Midtown_Gangsters?oldid=852196"
Community content is available under CC-BY-SA unless otherwise noted.