Standard White - 100%
“There's a lot of things the Lampadati Michelli does not have. Power steering, vacuum servos, air conditioning - all left on the shop floor. What it does have is a startling number of very angry horses under its hood, and given that it weighs about as much as a golf ball you can be sure of two things: first, it's really, really fast, and second, you're never going to look back.”
— Southern San Andreas Super Autos description.

The Lampadati Michelli GT is a classic car featured in Grand Theft Auto Online as part of the Southern San Andreas Super Sport Series update, released on May 29th, 2018, during the Madrazo Dispatch Services Week event.[1]

The Michelli GT is a 2-door 1960's sports coupe based primarily on a Alfa Romeo Giulia Sprint GTV, with other styling taken from a Lancia Fulvia Coupé.

The design of the car is relatively simple, featuring a small front end with a small chrome bumper. The upper area consists of the main chrome grille, small vents and circular headlamps with chrome surroundings, as well as small amber signals on the outer edges. The bonnet is simple in design and features two safety pins near the windscreen. The sides of the car uses flared fender arches, chrome circular rear-view mirrors and chrome door handles, while the greenhouse area features chrome trimmings around the windows and the inner pillars. The rear of the car features a small boot, rectangular tail lamps, a license plate and another chrome bumper, along with a small exhaust tube on the passenger side, below the bumper.

While the interior of the car uses the same dial set and most components from muscle cars such as the Dominator, it has unique features, consisting of upper aircon units on the centre and two large rounded housings for the driver-side dials. A set of wooden backing with chrome trimmings can be seen on either side of the dial cluster, with the left one holding small switches and the right one holding four small gauges centralized on the car and the "Lampadati" brand embedded on the lower right corner of the panel. The central console holds the radio set, another wooden backing with two more gauges, small switches and the corresponding gear stick/hand brake. The steering wheel bears the corresponding Lampadati’s Peacock logo—This version of the logo is unique to this vehicle, having green and blue feathers, and a white beak.

The primary colour of the car is applied on the body, while the secondary colour is applied on the bonnet and the stitching on the steering wheel. It uses a unique set of plain rims with various bolt details around the centre, wrapped in medium-profile tyres. The central portion of the rims can also support a dedicated colour, although they can only be repainted in Content Creator.

The car is fairly average for the Sports Classics class. It has a good amount of grip, making it good on twisting circuits. However, it does lack in top speed, making it disadvantaged to its rivals, such as the Casco, in long straights. It is grippy offroad, making it solid with other cars such as the Savestra. However, it does have a tendency to roll due to its bouncy suspension. Its small size and mass allows the vehicle to be pushed around easily, while not being able to ram other cars effectively.

The Michelli GT has all four advanced flags enabled[2]:

Like the Futo and the Retinue, the Michelli GT is powered by a four-cylinder engine bearing four throttle bodies, coupled to a 5-speed gearbox in a front engine, rear wheel drive layout. The vehicle has a very unique sound to it, having a high-pitched rev upon ignition, and uses slightly lower tone when driving. 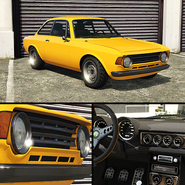 The Michelli GT on the updated Rockstar Games Social Club.

The Michelli GT in the cinematic preview on Rockstar Games Social Club. 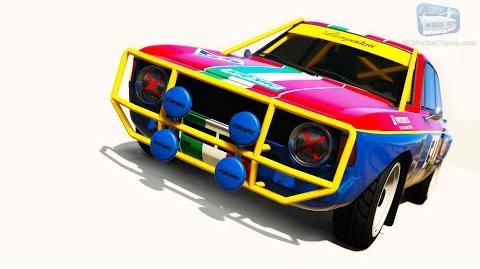