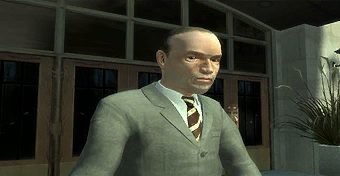 "Bobby Jefferson, the Ex-Secretary of Security Enforcement, came to Liberty City in order to give a speech on the increasing threat of immigrant-led organized crime. However, Jefferson became a victim himself as his convoy was ambushed on the way to the Civic Citadel and he was nearly killed. Violent crime is becoming more and more prevalent in this city and people like Mr. Jefferson are asking why in highly paid speeches. The RICO statutes and the pressure put on organized crime by new forms of surveillance has for years undermined the traditional criminal elements in this city. This void is being filled by hungry and ruthless criminals coming into our city from abroad." 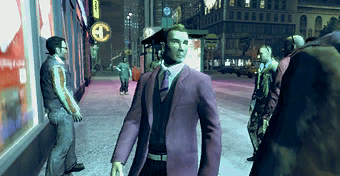 "Arch conservative and political gay basher, Bryce Dawkins, was yesterday hiding in rehab after he was discovered to have a double life. As well as a wife and children, Mr. Dawkins also had a boyfriend whom he kept in an apartment that the city financed. Photographs have emerged of Mr. Dawkins kissing Bernie Crane, his guest. Mr. Dawkins released a statement that read, "I am 100% heterosexual. Things look bad, but the evidence is just circumstantial. I do however have a substance abuse problem, which I am dealing with and I also have been addicted to bad behaviors, including visiting lap dancing clubs. I love women. Look at my wife. She's satisfied. Please leave my family alone. We need privacy. I (will) continue to stand up for what I believe in, even if I am just a man and a work in progress. I'm not gay and I never have been. Quite the opposite. I just have a soft spot for sad people who need looking after."

Retrieved from "https://gta.fandom.com/wiki/Michael_Wayne?oldid=646508"
Community content is available under CC-BY-SA unless otherwise noted.