Method in the Madness

Method in the Madness

In-game time
“I wanna be good, I want people to say "there goes Trevor Philips. he cooks the best crystal in South Blaine County/North LS County region, and by best I mean only." Is that too much too ask? It appears to be, because the Lost have some industrial-style operation going in Great Chaparral! Shut it down, torch the big canisters they use, then bring me the last batch they cooked.”
— Description

Method in the Madness is a mission in Grand Theft Auto Online given to the player by Trevor Philips. It is available for 2-4 players.

The Lost MC are heavily involved in methamphetamine deals and fabrication across the state. Trevor is angry about it and gives another job against the Lost and their involvement with methamphetamine. The team needs to go to a meth lab in Great Chaparral and destroy few vehicles from the Lost, where they keep tons of drugs. There will be bikers protecting it.

After the vehicles are destroyed, the team heads to the Raton Canyon, where the Lost are hanging around and protecting batches of drugs. The team needs to take a good distance from the hills and snipe all the members involved, because they are armed with sniper rifles. After all the members are dead, the team needs to collect the batch of methamphetamine and deliver it to Trevor's trailer in Sandy Shores. 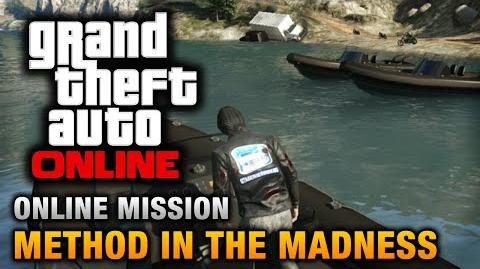