"As a good lawyer will tell you, your motives for sneaking into a meth lab on the shores of the Alamo Sea cannot be established beyond reasonable doubt. And they'll also tell you to expect a whole lot of pushback..."
―Description

Meth Lab Survival is a Survival job in Grand Theft Auto Online as part of the continuation of the The Diamond Casino & Resort update, released on September 26, 2019, during the Survival Series Week event. It takes place at Liquor Ace in Sandy Shores.

The enemies are the Varrios Los Aztecas. Their vehicle of choice to arrive in during later waves is the Phoenix, with them also using Buzzards on certain waves.

The players start on the balcony of the meth lab, which provides adequate cover against the enemies, at least during the first few waves. It overlooks the east and south sides of the building, where many different props are located to provide cover for the enemies.

Health Pack at the front of the lab.

Health Pack near the entrance to the upper floor.

Armour Pickup in the front yard.

Armour Pickup near the entrance to the shop.

View of the front yard from the balcony.

The hallway where tear gas can be thrown to kill all incoming enemies.

Hiding behind the counter in the shop is another viable option. 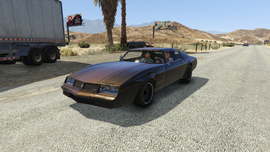 Retrieved from "https://gta.fandom.com/wiki/Meth_Lab_Survival?oldid=1190119"
Community content is available under CC-BY-SA unless otherwise noted.