Stealing a van full of meth.

15 initial enemies, incl. 2 bikers
+2 cars and 1 bike each with 2 persons on board,
triggered along the way

“Alright, fool. I got a word on a hustle. It's outside a town at this serious dealer's spot, but you don't gotta deal with him. He's been selling chemical to some hillbilly types cookin out their RV. Boost the caravan and meet my dudes at the YouTool depot off the freeway. You get money, and I'm in the crystal game. It's all good.”
— Description

Meth'd Up is a mission in Grand Theft Auto Online given to the player by Gerald. It is available for 1-4 players.

Gerald wants to get in the meth game now. There is a Journey full of meth gear at the Liquor Ace that Gerald wants. When the team arrives there, the redneck owners of the Journey will be doing a deal with Chef who is representing Trevor Philips. After stealing it, more rednecks will chase after the player on Sanchez dirt bikes and in BF Injections. The team needs to take the RV to The Families representatives who are waiting in the parking lot behind You Tool. 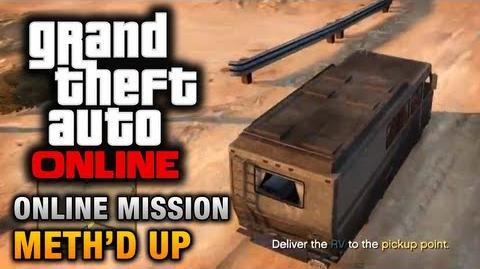