Benefit or Detriment from consumption

Meteorite Bar is a candy bar manufactured by Candybox.

It can be seen in Street Vendors across Liberty City and stores across San Andreas.

It is a dark chocolate bar with a gooey core that costs 4 dollars and will replenish a large amount of health. Meteorite Bars are found in 24/7, Limited Service and Rob's Liquor stores in San Andreas.

Their ingame webpage describes that the inside consists of melted dark chocolate and peanuts.

In Grand Theft Auto V, there is an ice cream bar variant of Meteorite advertised. An example of one of the advertisements can be seen in one of the shop windows on Del Perro pier.

It could be based on Snickers, since Candybox is based on Hershey, or Milky Way because of the "gooey core" and space-related name. 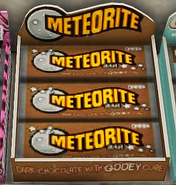 A Meteorite Mule in GTA V. 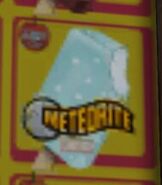 A Meteorite Bar racing outfit in GTA Online.
Add a photo to this gallery
Retrieved from "https://gta.fandom.com/wiki/Meteorite_Bar?oldid=1017743"
Community content is available under CC-BY-SA unless otherwise noted.