GTA Wiki
Register
Don't have an account?
Sign In
Advertisement
in: Characters, Characters in GTA V, Secrets,
and 3 more
English

Abrahams resided on Cholla Springs Avenue, Sandy Shores, for much of his life, until he began developing a severely psychotic state of mind, and an apparent obsession with both the number 8 and infinity (∞). He claimed that "8 is just infinity stood up", hence his nickname The Infinity Killer.

In 1999, Abrahams reached the peak of his psychosis when he murdered eight male joggers and hid their bodies in the waters around the small islands at the northern most part of the map, in a murder spree which was dubbed "The Infinity Murders" by the authorities. Soon afterwards, he was captured by the police and incarcerated in Bolingbroke Penitentiary. At some point during his incarceration, his home in Sandy Shores was destroyed in an arson attack, possibly by one of his neighbors.

Abrahams died in December 2004 at the age of 57, while awaiting trial for the Infinity Murders. He never confessed to committing the murders, but he admitted to having an "irrational obsession" with the number 8. The bodies of his murder victims were never found.

Coincidentally, Abrahams was the surname of a girl Eddie Low, another serial killer in the series, has confessed to have killed.

In a destroyed home on the corner of Algonquin Boulevard and Panorama Drive in Sandy Shores, there is a pinned The Senora Beacon report from December 2004.

“Merle Abrahams, the suspected Infinity Killer, passed away last night in Bolingbroke Penitentiary while awaiting trial for abduction and torture. Abrahams, 57, was suspected to be responsible for the Infinity Murders, a series of disappearances that happened 5 years ago. Police believed the 8 victims, who were all single young men who were killed while jogging, were all murdered by the same person and had circumstantial evidence linking Mr. Abrahams to the victims. No bodies were ever found and Abrahams never confessed, although he did admit to a weird obsession to the number 8.”

Abrahams' burnt-out house is located in Sandy Shores. Inside the house, there are various messages left by him. Among them is a message scrawled on a wall.

“8 is just infinity stood up.”

There are further clues, with a mountain shape with what looks like 4 clouds above it, and the repeated pattern of black and white number 8s. A pair of shoes are hanging from the ceiling in the back room and there are what appear to be body parts in preserving jars on a shelf unit.

Anti-Abrahams graffiti is sprayed on the north wall of the house.

Some barrels and trash cans around Sandy Shores can be seen with an 8 painted on them in blood.

On two rocks in the Senora National Park, there are short rhymes left by Abrahams which tell about the 8 people he killed, as well as saying he'll leave a clue where the bodies are.

— Rhyme on rocks near Beam Me Up.

Inside Bolingbroke Penitentiary, on the wall of a recreation yard, another phrase can be found written in black ink.

Below this message is an improved version of the mountain and "clouds" drawing. These form a map of the islands around North Point, north of Mount Chiliad. This explains where he dumped the eight bodies.

Even though the report states the victims were young male joggers, there are eight female bodies on the sea bed, all bound in plastic wrap with a number 8 inscribed on their torso vaguely visible through the wrap. The monochrome 8s on the walls in his house correlate to the way the corpses are bound, with the five black 8s relating to the five bound with their hands behind their back, while the three marked with white reflect the 3 corpses bound with their hands in front of them. Note that the Enhanced Version of GTA V significantly increases the seabed flora and makes at least two of the corpses very difficult to see compared to the original version on PlayStation 3 and Xbox 360.

Eight more female bodies appear in the southern waters of Cayo Perico in Grand Theft Auto Online in The Cayo Perico Heist update, but it is not revealed whether they were the work of Abrahams, a copycat, or are simply an Easter Egg to the Infinity Killer mystery in GTA V.

Abrahams is similar to Freddy Krueger, the antagonist of the Nightmare on Elm Street slasher film series, in two ways: 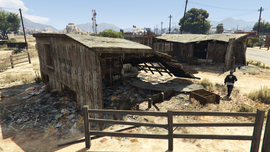 The house with the newspaper. 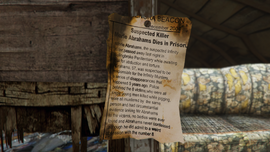 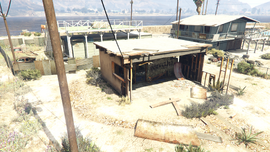 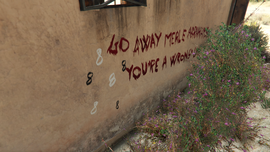 Graffiti on the north wall of his house. 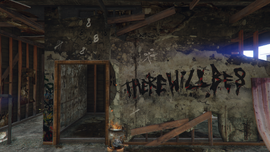 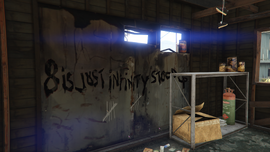 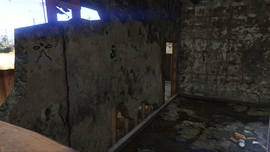 8s pattern (3 white, 5 black next to the doorway) and crude drawing (left). 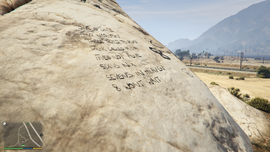 Message on the desert rocks. 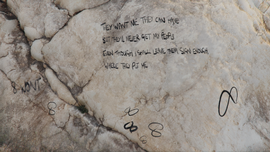 2nd message on the rocks. 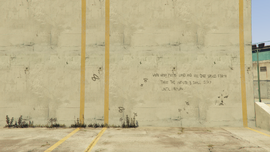 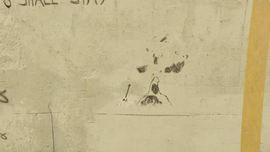 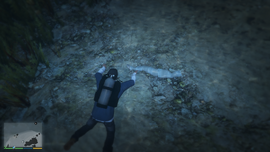 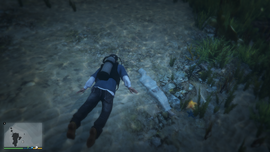 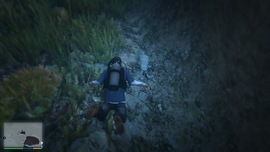 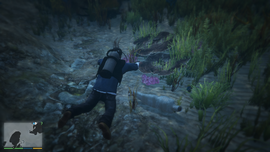 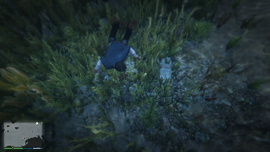 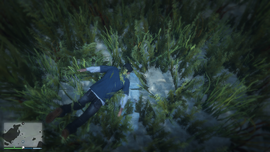 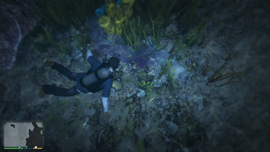 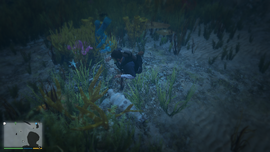 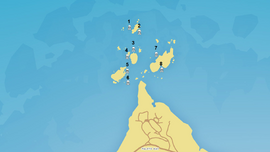