Fairuza Balk
“It's so difficult having a rich and powerful father. Vamos.”
— Mercedes Cortez in The Party.

Mercedes Cortez was born and raised by her parents, Juan Cortez and Mrs. Cortez, who later died, in an unknown country. She and her father later moved to Vice City, establishing themselves with the rich and powerful in the city, often inviting their friends to parties including drug baron Ricardo Diaz, who Mercedes dislikes.

Mercedes informs Tommy Vercetti in "The Party" that she dislikes her name, telling him, "You try living with it."

Cortez is shown as a possible love interest for Vercetti throughout Grand Theft Auto: Vice City, although this potential romance is never explored outside of a few teasing conversations; several phone calls between both of them were cut from the final game. She is presented as a very promiscuous woman; sleeping with Love Fist, starring in a porn film, possibly working at the Pole Position Club, and apparently working as a prostitute in Little Havana if Kent Paul is to be believed. This licentiousness is used as a joke in the end of the game, where her father calls Vercetti concerned about her behavior, only to reveal that he believed she was becoming a lawyer.

Mercedes: "See you around, handsome."
Tommy: "I'm sure you will."
―Mercedes goes to the Pole Position Club

Mercedes first meets Tommy Vercetti at one of her father's parties, where she is introduced to Vercetti by her father. She introduces several of the party's other guests to Vercetti, and afterwards has him drive her to the Pole Position Club.

Tommy: "Listen, you fancy having Love Fist?"
Mercedes: "Okay, but just as a favor I expect returned."
―Tommy recruits Mercedes

While helping out Kaufman Cabs, Vercetti is lured to a trap in Viceport by Vice City Cabs when they claim that Mercedes Cortez is requesting a pickup specifically from him.

Juan: "Oh Tommy, Tommy. I, I hear these stories, all these stories – I don't know what to think. Maybe she thinks she can do what she likes, but Tommy, tell me, is it true?"
Tommy: "Is what true?"
Juan: "These stories I hear. Is she really going to be a lawyer? Oh Tommy, the shame, the shame! You know, we Cortezes are a proud family. We would never allow a daughter of ours to become a lawyer. Please tell me it isn't so. I don't think I could take it."
Tommy: "Oh Colonel, [He laughs] I can assure you Mercedes is never going to become a lawyer. Don't worry about it."
Juan: "Oh thank you, Tommy. Tommy, thank you. The shame would be unbearable."

―Juan Cortez and Tommy discuss Mercedes over the phone

Upon killing Lance Vance and Sonny Forelli and claiming Vice City for himself, Vercetti receives two phone calls regarding Cortez; the first involves Kent Paul describing his encounter with a "street walker [...] down in Little Havana" named Mercedes who "could strip the lead out of a pencil" and apparently said that Kent "was the best she ever had", while the second has her father concerned about her behavior – believing that she is shaming the family – only to reveal that he had heard that she was becoming a lawyer, to which Vercetti laughs and assures him that she is not.

Daughter of Colonel Cortez. Likes to party, this one. 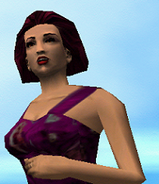