Standard White - 100%
“The tools may change, but the good old-fashioned thrill of the hunt stays the same. Your pioneer forebears were marksmen: you drive the HVY Menacer. They could strip their rifle blindfolded: you can pay your mechanic to fit a rear-mounted minigun. They could fell game with a single shot: you can cut through crowds of peaceful protesters like a hot knife through butter. Now, get out there and make them proud.”
— Warstock Cache & Carry description.

The HVY Menacer is an armored SUV featured in Grand Theft Auto Online as part of the After Hours update, released on August 28th, 2018, during the Menacer Week event.

The Menacer appears to be based on the Boss Hunting Truck, a custom Hummer based on the H1 K10 Series. The upper side of the front, judging by the grille and the rounded lamps, seems to take elements from the aforementioned Hummer H1.

The Menacer is distinctive by its boxy design and bulky profile, where the whole front is covered by a black reinforced structure. The lower side of the structure consists of a heavy-duty bumper with angled outer edges, featuring a winch In the center, two small hooks beside the winch, and ridged details near the edges. Right above the outer edges are two large housings, containing the main set of circular headlights and square lamps, the latter stacked in a vertical positioning. The upper side of the structure does not extend further compared to the lower side, which features two rectangular strips, a grille with circular vents, and two smaller high-beam lights. The hood area features an upper reinforced structure with a rectangular vent, which features chrome trim around it, while the rest of it is flat, with elevated borders on the sides and near the windshield.

On the sides, the truck features bulky arches and side skirts/steps, together with marker lights and black strips. The doors are relatively thicker in comparison to most cars and feature riveted hinges and black handles. The cabin area makes use of a triangle-shaped windshield that extends further towards the hood area, rectangle-shaped side windows with black trim around them, and black rear-view mirror wings. On the roof, several non-functional lamps can be seen above the windshield, along with an elevated compartment that features additional windows and the corresponding turret section similar to the Insurgent Pick-Up. The angled sections of the roof are partially occupied by the doors and the exhaust pipes, while the rear angled section of the elevated compartment features a red light strip split into three sections.

The rear of the car features an unopenable flat rear compartment with a rectangular window and a single handle, while the outer edges have additional marker lights. Similar to the front end, a black reinforced structure protects the rear end, where the lower section houses a winch in the center, two hooks beside it and a license plate on the passenger side, while the upper section houses circular main tail lights on the edges and the ridged details next to these. The interior of the truck is similar to the Insurgent and its armed variants, featuring the digital truck dials also derived from various industrial vehicles.

The primary color of the vehicle is applied to the main body, while the secondary color is applied to the winch details, front hooks and the rectangular strips on the front structure. The wheels are the same as those from the Insurgent, which also support a color (although only possible in examples spawned in the Content Creator).

The Menacer is equipped with a set of machine guns mounted next to the rectangular details on the front end, as well as a machine gun turret that resembles a Browning M2HB .50 caliber machine gun, the latter able to be replaced by a three-barreled .50 caliber Minigun resembling a GAU-19 gatling gun.

The Menacer is relatively slow in comparison to the Nightshark or the Insurgent Pick-Up Custom, often struggling to push other vehicles or run them over. The low profile also means it is very limited to drive over small obstacles in comparison to the Insurgent. However, it has enough torque and inital acceleration to propel the driver up on steep hills, and the strong chassis prevents most type of physical collision damage. The wide profile and wheelbase often means it has less chances of flipping over like the Insurgent or the Barrage.

The vehicle is powered by a diesel engine that is coupled to a 6-speed gearbox and powers all four wheels (with a torque distribution of 40% front and 60% rear), having the same engine sound as the Insurgent. Due to the nature of the vehicle, the hood cannot be opened and there is no engine model whatsoever.

The Menacer has fairly strong armor like the Insurgent and its variants, as it is able to survive up to eight rockets, nineteen missiles or explosive ammo before being destroyed with a player inside, and full armor upgrades. However, the armor is still inferior compared to the Insurgent Pick-Up Custom. Its major weak spot is the large frontal windshield; it is not particularly bullet-resistant and so the driver is quite vulnerable to incoming fire, especially when attempting to use the fixed machine guns to attack. The sides and rear are significantly better protected from small arms fire, but with fairly narrow slits in the doors. The gunner is very exposed, having only the turret hatch as a protection against targets from the back and below the gunner's level; the lack of a gunshield means they are quite vulnerable to return fire from their current target. However, similar to the Insurgent Pick-Up and the Custom variant, the gunner is immune to nearby explosions.

The Menacer is equipped with a set of weapons separated into primary (driver-operated) and secondary (gunner-operated).

The Menacer can only be modified at a vehicle workshop inside a Mobile Operations Center or Avenger.

When purchased, the Menacer comes painted in the following colors by default: 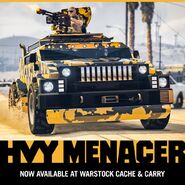 Promotional screenshot of the Menacer.

The Menacer with the "Blue Tartan" and "Orange Shade Camo" liveries.

The Menacer and the Oppressor Mk II with the "Santo Capra Coins" livery. 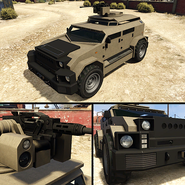 The Menacer on Warstock Cache & Carry.

The Menacer on the updated Rockstar Games Social Club.

The Menacer in the cinematic preview on Rockstar Games Social Club. 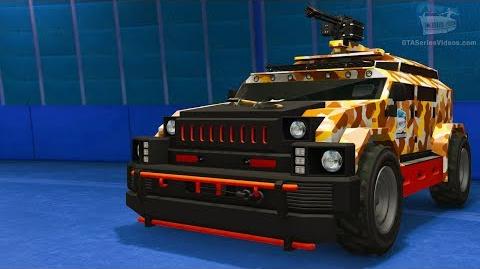